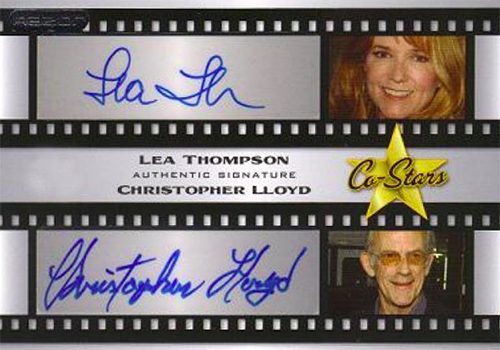 With the Chicago Cubs trying to make a World Series run, the memorable scene from Back to the Future Part II where the team wins the World Series has been on some sports fans’ minds.

Naturally, with today — Oct. 21, 2015 — being the day that Marty McFly arrives in the future there’s even more mainstream media attention with segments and clips about then and now and, of course, the Cubs.

But, if you’re a collector of the stars of the film and want autographs of the film’s top names? You’ll need a DeLorean with a Flux Capacitor.

Lea Thompson (Lorraine McFly) and Christopher Lloyd (Dr. Emmett Brown) have signed a small number of certified autograph cards but finding them won’t be easy. Thompson’s ink can be found in the 2010 and 2011 Pop Century releases and nearly all of her autographs are limited to fewer than 50 copies. Lloyd actually has more signed cards — 25 different ones found in 2010 Pop Century — but, once again, nearly all of them are low print runs, meaning they aren’t easy to find. The only cards sold recently on eBay went for $100 (Lloyd) and $35 (Thompson), while wax can be more challenging with no guarantees of either one being inside.

>> Click here to shop for Pop Century on BlowoutCards.com

You can, if you have the funds, find autographs of the film’s “Video Game Boy” in the Cafe ’80s scene. He goes by the name Elijah Wood.

What do you want to see on Blowout Buzz? Email BlowoutBuzz@gmail.com.