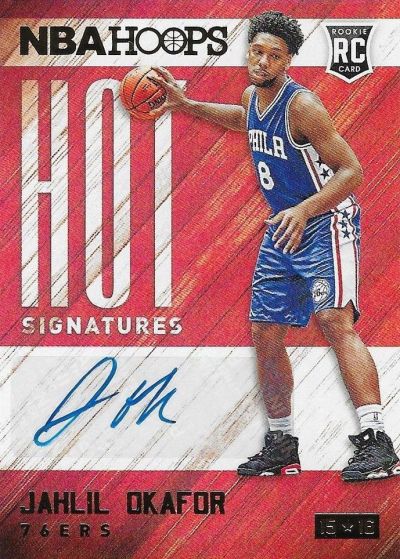 It is impossible to overstate the significance of Jahlil Okafor . . . though the Philadelphia region seemed mystifyingly indifferent. Think about it: The Sixers finally added a complete player.  This is Eric Lindros, Jim Thome, Donovan McNabb and Allen Iverson.

With apologies to Sir Charles, Okafor is the best real big man to hit town since Moses [Malone], rest his soul, except Moses wasn’t a savior. Jahlil Okafor brings salvation in short pants.

Okafor scored 26 points, grabbed seven rebounds and blocked a pair of shots in his debut. Said his coach later in the story about his ability to work on the court: “That’s a hint of Tim Duncan.”

We’ll have to wait a while to see if he’s the next Timmahhh, but we can start by looking at Okafor’s early cardboard. 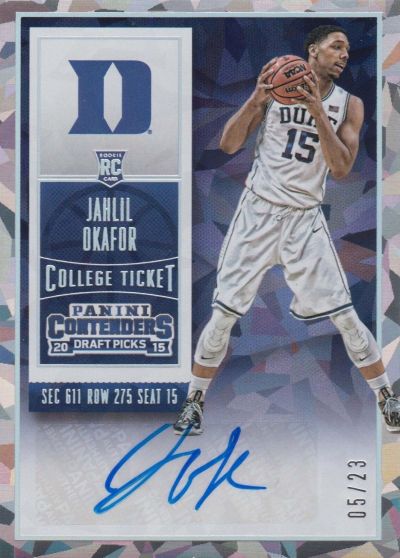 He appears in just two 2015-16 basketball releases from Panini America so far — the season-launching 2015-16 NBA Hoops and the 2015-16 Panini Contenders Draft Picks set, which arrived in hobby shops yesterday. His only other cards were releases in promo sets during the National Sports Collectors Convention this past summer.

Right now, his priciest NBA auto is his Hot Signatures card, which has sold for around $100, but the asking prices for the new Contenders auto rarities are, well, a bit more dramatic for the former Duke Blue Devil who went third overall in the draft.