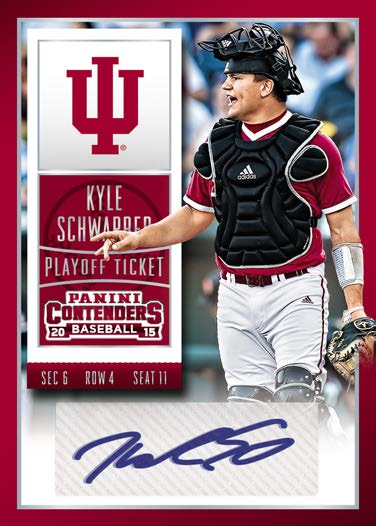 Here are some facts touting Panini America‘s latest baseball set, 2015 Panini Contenders, which arrives on Wednesday, Nov. 11, packing some prospect debuts and plenty of international, prep and college talents in their teams’ colors.

54 — There will be 54 players who are appearing on their first autographs in this one, according to the company, with Vladimir Guerrero Jr. and Victor Robles among them. Guerrero is the son of the former big-leaguer and will aim to begin his MLB career in Canada as a Blue Jays signee. (His dad, of course, began as an Expo nearly 20 years ago back in 1996.) Robles is a highly touted Nationals outfielder.

2 — That’s the number of boxes in a case that will pack an autograph from either Cubs catcher Kyle Schwarber, Dodgers shortstop Corey Seager or Red Sox prospect Yoan Moncada. Schwarber will be seen in his Indiana Hoosiers gear but is already on the minds of many collectors as is Seager, who will be found as part of the product’s USA Baseball contingent. Moncada is a new international signee who has very little cardboard so far.

4 — Number of boxes in a case that will include a seventh (extra) autograph.

30 — Percentage of autos in this one that will be short-printed or numbered to fewer than 99 copies.
Name-dropping I — Here’s a rundown of big names found in this one in advance of next year’s class of MLB rookie cards: Stephen Piscotty, Aaron Nola, Trea Turner, Luis Severino, Michael Conforto and Robert Refsnyder.

One thought on “Buzz-worthy numbers: Facts about 2015 Panini Contenders baseball, which arrives on Wednesday”