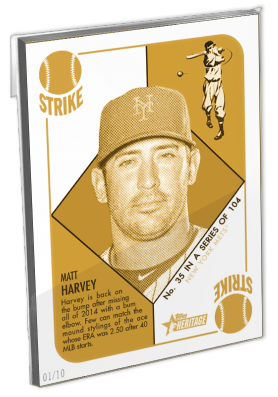 Collectors who busted into boxes of the 2015 Topps Heritage ’51 set when it arrived last week found one autographed card per set with an assortment of some of the biggest young names in MLB today also inside.

Now, Topps is making the release (but not the autographs) even bigger.

The company has released four 5×7 sets — two per league — for the release exclusively on Topps.com. For the high-rollers (or set-breakers who sell), there’s the Gold version which is $499 per league and limited to just 10 serial-numbered copies. For the rest of us, there’s the standard version that’s $99.99 and limited to 99 serial-numbered copies.

For the American League there are 54 cards in the product, which is printed on 16-point card stock, while the National League checks in at 50 cards. Many of this season’s top rookies, including Carlos Correa and Kris Bryant, can be found in these sets.

>> Click here for the standard Topps Heritage ’51 set on BlowoutCards.com