Josh Norman is a cornerback for the 7-0 Carolina Panthers and in his fourth season after being drafted 143rd overall to of Coastal Carolina back in 2012.

And if he’s anything like most other defensive players in the NFL he’s not on the minds of that many collectors.

Champ Bailey knows a bit about playing cornerback in the NFL, though, as a 12-time Pro Bowl selection and a member of the Hall of Fame’s All-2000s team. He sees big money in Norman — enough for us to wonder if he might be a football card collector. 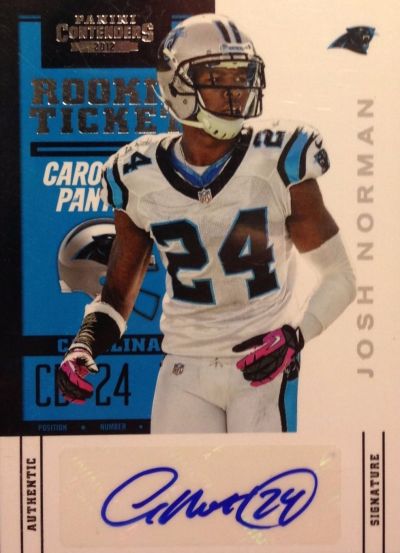 “If it just started this year, then I’d be reluctant, I’d say show me more. But this goes back into last year,” said Bailey of Norman’s prowess in an interview with CBS Sports. “No doubt, he should be paid as the top corner in the game.”

Let that sink in. The top corner in the game.

Now, let’s take a look at his cardboard resume and see if we can see anything of note here. Well, Norman’s not quite like Seattle’s Richard Sherman — who had just one Rookie Card when the “Legion of Boom” made a Super Bowl run — but he’s not plentiful on cardboard since his 2012 debut. He has four RCs and they are all autographed. He’s got a short-printed 2012 Panini Contenders RC limited to 550 copies, a 2012 National Treasures RC limited to 99, a 2012 Panini Playbook card limited to 140 and a 2012 Panini Totally Certified card limited to 290. Oddly, of his 28 total cards a whopping 23 of them are signed and 20 of them can be found in Panini America releases.

Not long ago, you could find a certified auto on eBay for as low as $1.99 and someone paid less than $5 for his NT autograph. Now, they’re pushing upwards of $30 a pop and, at the present, there are just three Norman autos even available on the auction site.

Just wait until everybody else realizes it.

2 thoughts on “Carolina’s Josh Norman just might be the NFL’s best cornerback — do you have his autograph?”