Holly Holm shocked the MMA world on Saturday night by knocking out Ronda Rousey to become the UFC women’s bantamweight champion, dethroning the champ who has been a force in the Octagon and on Topps trading cards. 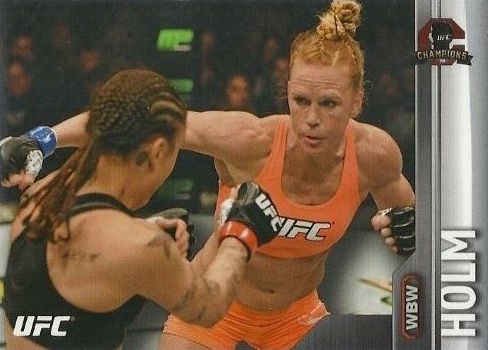 She does not yet have a certified autograph. She has zero memorabilia cards.

Holm has two base Rookie Cards — each with parallels ranging from 199 serial-numbered copies down to one.

Rousey had won her last three fights in a total of 64 seconds and had held the title since 2012. Her mainstream movie appearances had helped propel her certified autographs into elite status for an athlete of any sport, commanding hundreds of dollars on a regular basis and thousands for her first Topps Finest autograph from 2012.

Copies of Holm’s cards — particularly the parallels — have gone crazy on eBay with a silver parallel card limited to 199 copies selling for $150 and others topping $100. A 1/1 Gold previously sold for less than its $88 Buy-it-Now price, meanwhile asking prices for cards in active auctions jumped substantially.

The only active auction for her Rookie Card from Champions shot up from a few bucks to $56 in the minutes after the fight and sold for $132.50 at 1:30 a.m. Eastern.

>> Click here to shop for 2015 Topps UFC cards on BlowoutCards.com.