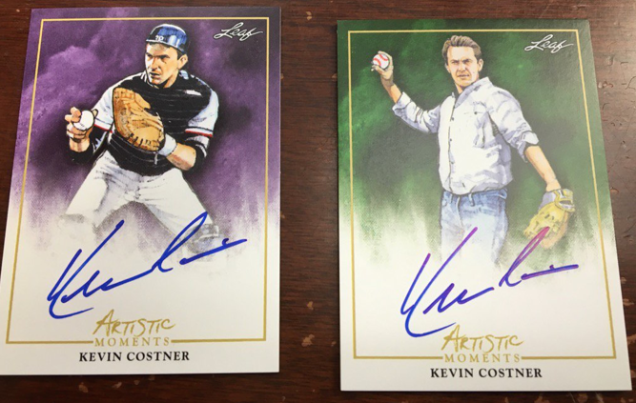 If he signs it, they will come.

Leaf Trading Cards revealed on Friday that it has the first certified autographs of actor Kevin Costner found in packs of the upcoming 2015 Leaf Trinity baseball product.

Other than occasional cuts, he had never signed for a card company.

Costner’s sports roles are many — Crash Davis in Bull Durham, Ray Kinsella in Field of Dreams Sonny Weaver Jr. in Draft Day, Billy Chapel in For Love of the Game and Roy McAvoy in Tin Cup to name a few.

These cards will be found in Trinity, which arrives on Jan. 27 with six autographed cards per pack. These, previously teased as a mystery celebrity, will be limited in volume and have parallels as rare as one copy.

The cards will use artist renderings of memorable moments from the films. The card at left shows him in Bull Durham, while the other is for Field of Dreams.