The NFL’s newest emerging name — Seattle RB Thomas Rawls — ran for 209 yards and a touchdown and added three catches for 46 yards and a score. But — and this is a big but for collectors — he doesn’t have a single legitimate NFL card, so we’re stuck with this guy. It turns out that “this guy,” aka Tampa Bay Bucs QB Jameis Winston, had a record-setting day for his team with five touchdowns and 246 yards passing in a 45-17 win over the Eagles. Is he that good — or are they that bad? Doesn’t matter on cardboard as he’ll continue to be one of the rookies collectors hope to find in this year’s football boxes. 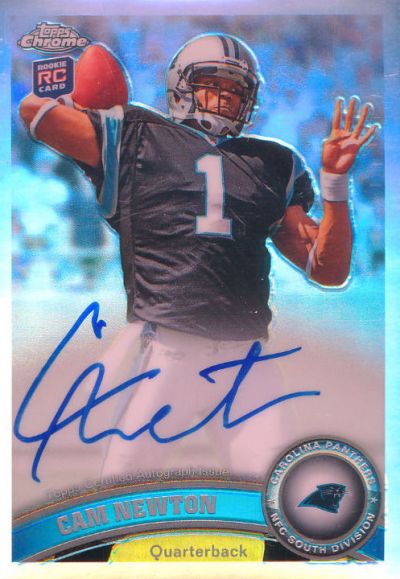 — Cam Newton Winston wasn’t the only QB to throw for five touchdowns and 246 yards on Sunday as this Carolina Panthers star also put up those exact numbers in a 44-16 win over the Washington Redskins. This team looks primed to do big things this season and that would mean  big things for his 2011 Rookie Cards.

— Doug Martin The Tampa Bay running game was effective enough that this RB had 177 rushing yards at the half before finishing with an NFL-leading 235. That was the 23rd-highest single-game total in NFL history. The record is Adrian Peterson‘s 296 back in 2007. Martin’s career high is 251 from back in 2012 and games like this reinforce that The Muscle Hamster might be one of the more-overlooked runners (or best bargains on cards) today. His RCs can be found back in 2012.

— Eddie Lacy The Green Bay Packers RB showed two things on Sunday. One that there’s still hope for him yet and, two, that he’s not done yet. He had 22 carries for 100 yards in a 30-13 win over the Vikings. Those aren’t wowing numbers but that’s his first 100-yard game of the year for a player whose bad buzz we’ve noted a few times right here. His 2013 Rookie Cards still might be a sell for some but at least there might be a few more buyers now. 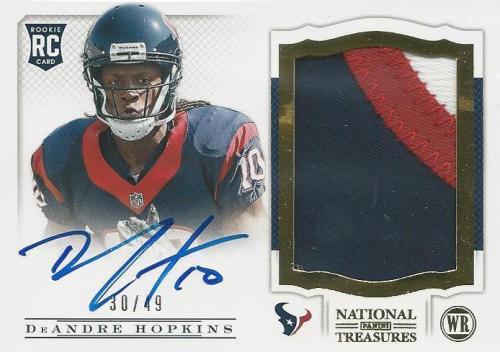 — DeAndre Hopkins This Houston Texans WR showed he was a top target with five catches for 118 yards and a pair of touchdowns in a win over the Jets. His 2013 RCs have been the target of some collectors for some time, but that was his fifth 100-yard game of the year and he’s got four touchdowns in the last three weeks. More people should be noticing.