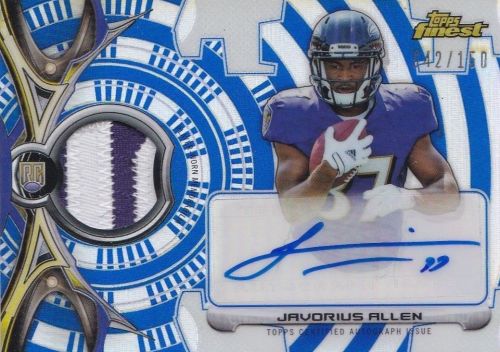 Take a look at the NFL’s stat sheets for running backs and it’s not a pretty sight these days in terms of production that would wow anyone.

At least not on the Emmitt Smith Standard.

However, with the game continuing to change so, too, are the roles that RBs play. Take a look at the stat sheet for catches on Sunday and there was a new name right at the top — and it wasn’t a receiver. Ravens RB Javorius Allen had 12 catches for 131 yards and a touchdown on Sunday. Tack on 17 carries for 63 yards and the fourth-round pick out of USC looks even more impressive.

Could it be a fluke? Could it be an arrival? Only time will tell. For the season, Allen now has just 367 yards rushing and 242 yards receiving with just two touchdowns total on the year. Buzz bets there are some bargains to be had.

— Ryan Fitzpatrick Get out your DeLorean if you want to pull a Rookie Card of the Jets QB out of a pack. This old-timer’s RCs are found back in 2005. There was nothing oldschool about his NFL-leading 390 yards passing and two touchdowns in a 23-20 overtime win over the Giants, though. His RCs are smack dab in the era of silver-sticker autos but there are some aesthetic gems to be had like his Exquisite card above. (Also perhaps fueling some interest in his cardboard is that he’s one of a handful of Harvard players in the NFL.)

— Allen Robinson Only five WRs had two or more touchdown catches in Week 13 and Robinson topped them all with three as the Jaguars put up 39 points against the Titans but still couldn’t win. Robinson’s day was impressive with 10 catches for 153 yards, too. This member of the 2014 rookie class topped 1,000 yards for the season in the game and trails only one player for the league lead in touchdowns.  Buzz thinks he might be a bit under-rated among the WRs with similar touchdown totals.

— Blake Bortles The guy throwing all those touchdowns to Robinson on Sunday didn’t dish them out to just one guy. The Jaguars QB tossed a league-high five touchdowns (as did Cam Newton) during a 322-yard day. For the year, this member of last year’s rookie class has 27 touchdowns and 3,274 yards — not bad and probably getting better.

— Marcus Mariota The guy who out-did al those Jaguars fireworks on Sunday was the Titans QB who threw for 268 yards and three touchdowns and rushed for 112 yards and a score. He and Jameis Winston keep taking turns weekly as the guy who’s claiming the title of the NFL’s top rookie this year. Mariota missed some time this season, but his totals for the year are stacking up quite well to help justify the attention his cardboard keeps getting.