Somewhere out there in a galaxy not far, far away is a list where every single character in the Star Wars universe exists. Whether they are a bit player or a background character, they seemingly all have names because of merchandising needs and they all probably have back stories to justify the action figures, trading cards and other ways those small-time wonders on the big screen can help make big bucks.

We’re not here to showcase bit players who had a few seconds or a few lines. We’re here for 10 of the top names from the previous films as the hours melt away before the arrival of The Force Awakens on Friday.

Here are 10 cool cards for 10 key characters in the past Star Wars films. 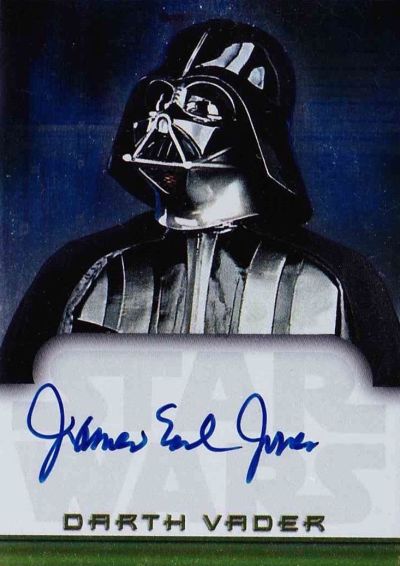 Darth Vader
The Card: 2001 Star Wars Evolution Autographs #10 James Earl Jones
What’s Cool Here: The voice of Darth Vader belongs to Jones, who is among a few people who have helped the character come to life through the years. You might think that he’s an expensive autograph but he’s really not. You may pay a little more here because this is the first of his certified autos, though.

Yoda
The Card: 2002 Star Wars Attack of the Clones Widevision Autographs #10 Frank Oz
What’s Cool Here: Frank Oz was the voice and puppeteer for Yoda in the earlier movies and this is his only certified autograph he’s ever signed. Oz is, of course, also a key player in The Muppets universe. He reportedly doesn’t do conventions, so that makes him a bit tougher to land for Star Wars ink.

Admiral Ackbar
The Card: 2015 Star Wars Masterwork Autographs #38 Tim Rose
What’s Cool Here: Rose is the actor who helped bring “It’s a trap!” to life. His other credits, which include voice and puppeteering work, include Howard The Duck and The Dark Crystal. He’s had autographs in a few Star Wars sets and this one is pretty available from one of the highest-end releases out there. (How available? Buzz even owns one.)

Princess Leia
The Card: 2015 Topps Star Wars Galactic Connexions 14K Gold Disc
What’s Cool Here: The Topps Connexions discs are only found at Walmarts and the rarest of the rare in the packs is this 14-karat gold disc that was limited to only five copies, according to Topps. There reportedly aren’t going to be many — if any — “Slave Leia” items in the future, but that’s not why this one could command big bucks. Turns out there’s a decent amount of demand for pack lots and rare singles in general. 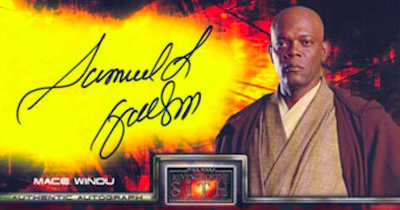 Mace Windu
The Card: 2005 Star Wars Revenge of the Sith Widevision Autos #5 Samuel L. Jackson
What’s Cool Here: We all know Samuel L. Jackson is a big name in Hollywood, arguably one of the biggest in the last 20 years because of his wide spectrum of roles. Through all that he has just two certified autograph cards and this one was the first — and only Star Wars auto of the bunch. It’s not an easy find and you’ll pay big for one.

R2-D2
The Card: 2013 Star Wars Jedi Legacy Autographs #15 Kenny Baker
What’s Cool Here: The guy who was inside the R2-D2 shell for every movie has been a steady signer for card releases and at conventions. This is just one example of many options out there for Star Wars fans.

Luke Skywalker
The Card: 1977 Topps #1
What’s Cool Here:  The first card in the first of many card sets made for Star Wars throughout the years shows its top character in one of his memorable moments. Aren’t you a little short for a Stormtrooper? 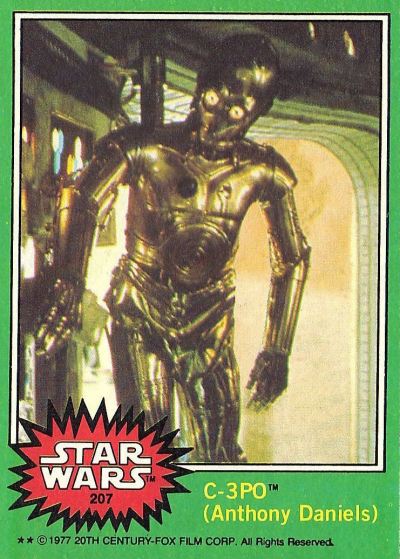 C3Po
The Card: 1977 Topps #207 (corrected version seen here)
What’s Cool Here: Found in the fourth series of Topps Star Wars cards back in 1977 was perhaps one of the first “obscene” trading cards (for any set anywhere — sorry, Billy Ripken). On the error version, the image of this iconic droid was altered and it’s a pricey one for standard cards. 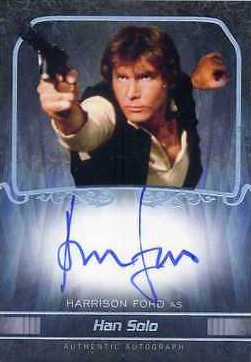 Han Solo
The Card: 2015 Star Wars Masterwork Autographs #15 Harrison Ford
What’s Cool Here: Ford has been a rare autograph for Star Wars fans in the past and his few certified autos command serious money because they are immensely rare. This on-card auto from earlier this year is no exception.

A Force Awakens Bonus: The first certified autograph of Daisy Ridley as Rey. With no previous major roles and no certified autographs could the first ink of a key character be a $1,000 card when it likely arrives this week? Perhaps if it’s limited in quantity — and also because there’s obvious demand for her ink already.