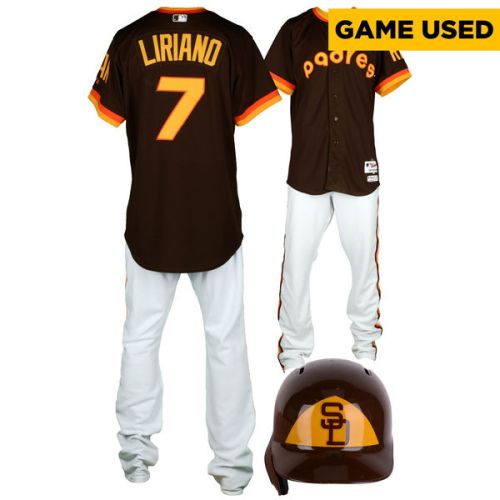 Game-used collecting has changed immensely in the last 20 years or so with the memorabilia card — you know, those little swatches embedded into cards that can still get us going if it’s the right player or an impressively designed piece of cardboard.

Relics may not always be expensive these days, but they can add some definite variety and surprise into packs of cards — and partly because of the need for game-used items for cards it seems memorabilia has become more available than ever.

It’s not always expensive. In fact, it can be downright enticing to chase jerseys of players who you might not see all that often on cardboard (or even like!) simply because there are game-used bargains to be found.

The San Diego Padres jersey, pants and batting helmet up top? They were used on Sept. 20, 2014, by Padres outfielder Rymer Liriano. Sure, they were used as he rode the pine and  practiced that day but it will only cost you $299.99 for all of it via Fanatics Authentic. That’s not super cheap, but it’s also not as expensive as the gear bought off the shelf unused. And if that were a star’s uniform? Add a zero or two to the end, depending on team and caliber of player.

For a beginning collector or maybe a casual one with a lot of varying tastes, a game-used jersey of a common player can spark something inside — a new appreciation for a player otherwise possibly overlooked or maybe it evokes memories of a favorite team or game one attended. It doesn’t have to be a star to be interesting.

Some of the jerseys seen below can be had for as little as $99.99 via Fanatics Authentic, which has deals with teams and pro players to help bring their memorabilia to market. Among the teams available right now include Florida State, Miami, Air Force, Texas and Auburn for the college ranks and the Texas Rangers, Cleveland Browns, San Diego Chargers and Philadelphia Eagles from the pro ranks. Some of the jerseys available are essentially more limited than others because they come from Jackie Robinson Day or other specialty games where uniforms were customized for the event. Those can be enticing simply because of their uniqueness — and, again, they’re not always expensive.

Maybe you’ve already found the key items for your collector but need one more oddball or surprising item this holiday season? An inexpensive gamer might hit the spot — and they’re not exclusive to Fanatics, either. Other companies such as Steiner Sports also have varying selections of items and league auction websites (both major and minor leagues in baseball, as well as football, basketball, hockey and even on occasion the WWE) can also have buy-it-now bargains for someone who’s considering dabbling in used memorabilia without taking the risk of it being misrepresented.