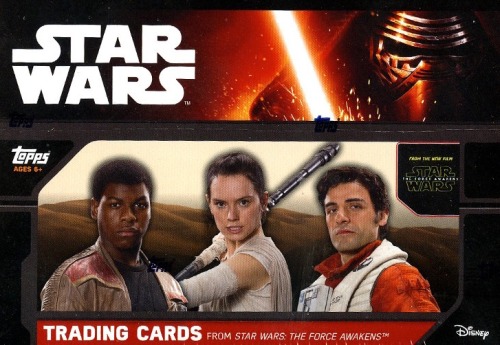 The awakening will be felt by many starting tomorrow but there still could be a sleeper set out there when it comes to Topps‘ newest Star Wars trading cards.

Two types of 2015 Topps Star Wars: The Force Awakens Series 1 boxes have been made for hobby distribution atop its retail presence. The standard hobby box will have all the hits and things collectors have come to expect — expect a checklist to arrive on those in the next 24 hours — but there’s also a Hobby Special Edition version of the product that has a cheaper box price.

And these boxes have an added bonus not found anywhere else.

There will be a foil parallel of all 200 base cards found only in the Special Edition boxes and they will be limited to only 250 serial-numbered copies per card. This is on top of the standard parallels, which will be found in all runs.

There should be approximately three of these numbered parallels per Special Edition box, so if you do the math … well, there just aren’t that many boxes to go around. Once the boxes are gone, they’re gone, and building a set, which won’t be easy, could end up being a special item. After all, there are dedicated collectors of Star Wars who simply need everything. This set won’t be an impossible challenge like rarer parallels, but only being found in one type of wax will make it tougher for collectors to find singles compared to the cards found in all wax formats.

With the mass appeal of Star Wars, there are plenty of people — plenty of non-card-focused collectors, too — buying in. Other than autographed cards and other Relics/Manurelics, there aren’t always a lot of tougher-to-find Star Wars cards these days simply because of that mass appeal.

Starting on Friday, though, the Special Edition boxes of 2015 Topps Star Wars: The Force Awakens Series 1 just might change that.

>> Click here to shop for Star Wars cards on BlowoutCards.com.

4 thoughts on “Could Topps’ The Force Awakens Special Edition parallels be the sleeper set of year for Star Wars?”