Star Wars Galactic Connexions fans will need to eat fresh to collect them all beginning tomorrow. 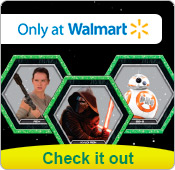 Topps‘ second series of packs for the collectible disc game arrives tomorrow only in Walmart stores, but that’s not the only reason that a fan would have to hit the retail giant.

There are also Connexions discs found only at Subway shops that are located inside of Walmart stores.

There are six different Green Starfield Subway-only discs that will only be found in kids’ meals — you know, the ones that will come in a Star Wars-themed messenger bag like the one seen above. You can see three of the green discs here.

There are 75 standard discs in the second series found in packs — each with common, uncommon and rare versions as well as parallels that are even tougher. (Click here to view the checklist and get all the details.) The first wave of the discs is now retired.

On top of the Subway promotion, some Walmart stores also will have Blue Starfield promo discs for 10 characters with giveaways of those left up to the individual stores. For those not familiar with the game, it turns out there’s a decent amount of demand for pack lots and rare singles.

>> Click here to shop for Star Wars cards on BlowoutCards.com.