When collectors crack into boxes of 2015 Panini Immaculate Collection College beginning tomorrow, they could find one of the more unique memorabilia cards made in a long time.

It’s a card of baseball Hall of Famer Tony Gwynn from his days as a player at San Diego State.

What makes it different, though? The card appears to include a swatch from the Aztecs jersey seen above. 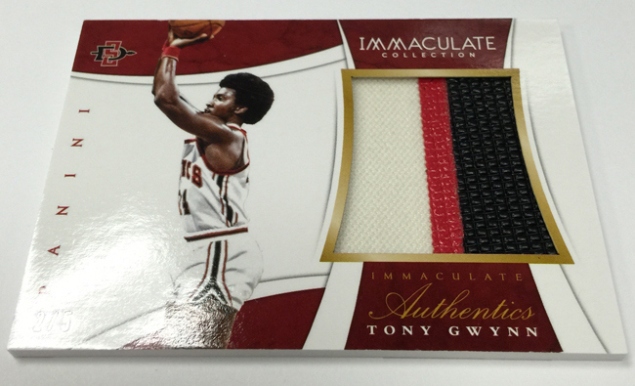 Gwynn became “Mr. Padre” and a Hall of Famer for his exploits on the baseball field — and he was even the coach at his alma mater before his death in 2014 — but he was recruited to the school as a star basketball player.

The point guard was an all-Western Athletic Conference selection twice and is the only player to earn those honors in two sports, according to the school. He tied the Aztecs assists record with 18 in a game against UNLV in 1980 and still holds records for mosts assists in a season and career. In his final game, he scored 16 points and had 16 assists before he was drafted in the 10th round of the 1981 NBA Draft by the San Diego Clippers.

However, his three years of college baseball proved to be more successful as he was a third-round pick of the Padres that same year. As a big-leaguer, Gwynn hit .338 over his 20-year career and won eight batting titles while amassing 3,141 hits — one of the best hitters ever and certainly among the elite of the modern era. The 15-time All-Star was elected to the Hall of Fame in 2007.

The jersey appears to come from an assortment of items from Gwynn’s estate sold by SCP Auctions earlier this year and, based on the swatch, the jersey appears to have been used for the cards. (The piece is from the screen-printed number, not the piping on the jersey.) Buzz hasn’t seen the back of the card to see if there are any additional details beyond the standard lines, but there can’t be too many game-used college basketball jerseys of baseball Hall of Famers around.

That makes it pretty special.

In fact, this should be the only one … so far … unless one of Dave Winfield‘s Minnesota Golden Gophers jerseys was somehow unearthed from back in 1973.