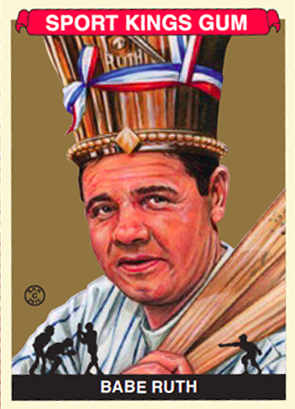 What: 2015 Leaf SportKings trading cards
Arrives: January 2016
Box basics: One autograph, one memorabilia card, four base cards and one mini per box.

What’s buzz-worthy: SportKings returns with a new mix of cards that includes numbered autographed parallels and buyback autographs for stars throughout the sports world (and even a few from elsewhere) on the famed design from the 1930s.

The Basics: There will be just 225 12-box cases made for the product, which will include autographs from Nolan Ryan, Ken Griffey Jr., Cristiano Ronaldo, Al Pacino, Pele, Roger Federer and Mario Lemieux to name a few. … The base set will consist of 100 big names and each will have a mini version. … SportKings Signatures will feature new artwork and ink, while buybacks will be found from the six previous releases with ink as well. Autographs will also be found on memorabilia cards, Dynasty King cards, and Retired Numbers cards. … The memorabilia lineup will include seven types of inserts with at least three of the sets featuring multiple game-used swatches from some of the biggest names in sports from the past as well as the present.