Admit it, you may have overdone things when it comes to buying football cards this year — maybe past years, too — and have a big ol’ stash of cards you don’t know what to do with. What do you keep? What do you jettison? That’s where having a collecting focus comes in. If you haven’t overdone it on wax, then maybe having a focus for your single-card buys is a need. (That’s one even Buzz has struggled with over decades of collecting.)

One potential niche that seems prevalent this year in NFL and college sets? Cards showing the kids of former NFL players who have now made their way onto cardboard.

They seem to be everywhere this year. Second-generation players aren’t anything new, of course, but they can be a fun way to revisit the past while also collecting the present. Buzz started his collecting days in the 1980s and, back then, a Joe Montana autograph wasn’t an easy find — plus, his handwriting didn’t justify the high cost on a small budget. Fast-forward to 2015 and Nick Montana has cardboard. He won’t be an NFL star — he wasn’t really even that good in college — and the handwriting also isn’t great, but he’s got a certified autograph card.

Buzz wanted it, Buzz got it. Can’t say the same thing for a Joe autograph, though, even all these years later.

It’s not hard to compile a list of second-generation NFL players and they’re sometimes obvious like Peyton Manning and Eli Manning, sons of former New Orleans Saints quarterback Archie Manning. There’s even a three-generation NFL family, which you probably already know about. 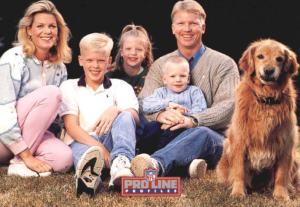 In some instances there are cameos of these players as kids when they appeared on cards with their dads. Two examples can be found in the old Pro Line sets from the early 1990s. The 1992 Pro Line Profiles card above? It’s a Howie Long card on paper but it also shows Chris and Kyle Long, who both have NFL experience and NFL cards made long (yep, intentional) after this one. This is a cool card in Buzz’s book even though it’s not worth a thing. The other card in this set is a Phil Simms card showing son Chris long before he played for the Tampa Bay Buccaneers.

That’s just a sampling of names from this year’s sets — there are more second-generation players on cards. They’re probably not all big names to most people, but with this focus and some added research they could be a fun and affordable group to collect. (Of course, some of the dads may not have cards depending on when they played.)

Other NFL kids have just wrapped up their college careers or are still going strong in school but have cardboard thanks to the U.S. Army All-American Bowl. Two of those guys are Stanford players — Barry Sanders Jr. and Christian McCaffrey — and they are not alone among the options collectors could consider for second-generation collecting.

A sampling of second-generation NFL players from the past and present includes Brian Griese, Jarrett Payton, Kellen Winslow II, Anthony Dorsett, legendarily bad WWE announcer Mike Adamle, Matt and Tim Hasselbeck, Eric Metcalf and even Andrew Luck, whose dad was a Houston Oiler and appears on a few cards. (Buzz now kind of wants one of those.)

Part of the fun of creating a small collecting focus like this one is that you may already have cards of them in your collection. You just have to dig into all of those boxes you may have piled up to find them and pull them all together.