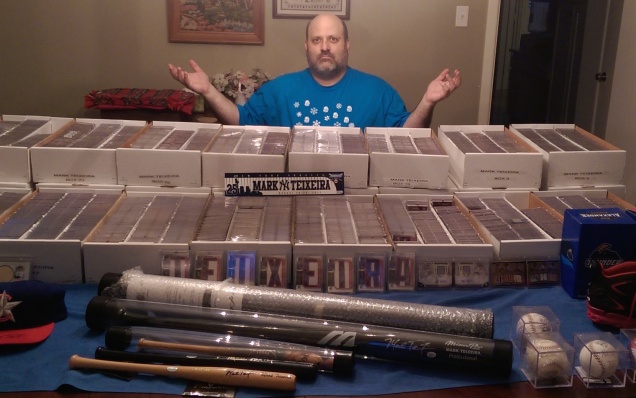 Robert Morris
Also known as: @dalsubfan on Twitter and most other places
Website: http://sportscardalbum.com/u/dalsubfan
Email: dalsubfan@gmail.com
Location: Texas
Work away from cards: Manufacturing
Collecting since: 1970-80, 1992-95, 2005-current

Main focuses: My collecting focus is Mark Teixeira cards and whatever else interests me. Hall of Famers, 1/1s, memorabilia …

Current collecting projects: In addition to chasing at least one of every Mark Teixeira card made (at 5,700 or 81 percent), I am completing th 2013 Historic Autographs Originals 1933 set. Also working on a bat with Hall of Famer autographs — at 65 so far.

One cool card I own: Well, there are three. Three of the Babe Ruth 1933 Goudey cards with the cut autos from 2013 Historic Autographs Originals 1933. Need the fourth, No. 53.

One cool stat: 920. I have 920-plus Mark Teixeira 1/1s including plates. And no that is not enough, please let me know if you have more.

Best pull: My best pull was a pair of signed Air Jordan Retro Red shoes from the first Heroes of Sport break I was in. Been an addict ever since.

In his words: I collected as a kid, then again when I started having kids, and then restarted again as way to connect with my favorite Ranger players and my kids. Was originally collecting Teixeira, Michael Young and Hank Blalock, but dropped Blalock and later Young to focus on Teixeira. In the same month in 2007 the two largest Teixeira collectors contacted me to buy them out. So that got me way over the top on Teixeira cards. Started going to shows and then National to find cards. That got me into memorabilia and autographs. Now heavily into breaking online and hanging out with my card hobby friends. I go to National every year to add to the Hall of Fame bat and hope to find at least one Teix card I need.