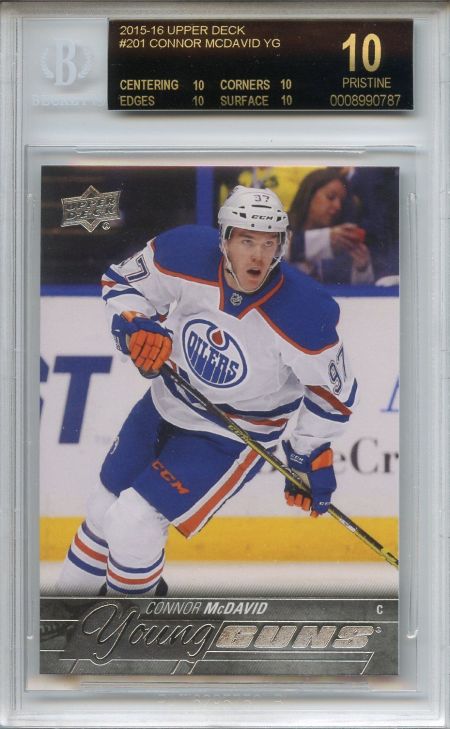 We all knew that Connor McDavid was going to be a big deal and we all knew his Young Guns Rookie Card from 2015-16 Upper Deck would be kind of a big deal, too.

But what about a perfect BGS Black label specimen? Well, one of these sold this week so we know how big it can get.

This particular card went for $2,500 on eBay via a best offer on Tuesday. (No, really, go look.) That’s about 10 times what a raw one might sell for online and double what a regular BGS 10 version has sold for in recent weeks. It’s also about the same as a BGS 9.5 copy of the much-rarer Exclusives parallel that’s limited to only 100 copies.

The McDavid card has been a hot commodity grading-wise with 158 copies graded during the Toronto Expo in early November alone. Since then, the total has risen to 699 on the pop report with 72 of those getting a BGS 10 grade. The lowest was a single 7.5, while a serious majority — 575 copies — have graded a 9.5.

The card also has seriously dominated the grading of all McDavid cards as he’s been slabbed just 2,239 times overall, including cards made as early as 2012 when he first appeared on In The Game checklists.

A pair of Raw Card Review BGS 10 cards — no subgrades to know if they are perfect, though — are on eBay right now with asking prices of $2,000 for each one of them.

Just think what might happen if the No. 1 draft pick is healthy, playing and then goes on a hot streak … it could be scary.