The Pro Football Hall of Fame is an odd one in terms of who gets in and who doesn’t — many memorable names from the past have yet to make the cut and many who do you might not know because of the positions they played and their relative lack of cardboard.

Part of that’s on the hobby, but part of that is on the voters.

Buzz briskly scoured the record books to select five players who you probably have in your collections who aren’t in Canton. Check ’em out …

Ken “Snake” Stabler
Quarterback, Oakland Raiders, Houston Oilers, New Orleans Saints, 1970-84
This iconic Raider was a rebellious superstar and one of the game’s top quarterbacks from 1973-77, leading his team to a 50-11-1 record in the regular season and a championship, too. He died earlier this year and the Hall of Fame’s Senior Committee nominated him as one of two long-retired candidates for the honor this year. Will he get in? He should have been already … but we’ll find out if he makes it on Feb. 6.
Key Stats/Honors: Threw for 27.938 yards and 194 touchdowns (45th all-time) … 1974 NFL MVP … Member of Hall’s All-1970s team.
Super Bowl Rings? Yes
Buzz-worthy Quote: “f I had one drive to win a game to this day, and I had a quarterback to pick, I would pick Kenny. Snake was a lot cooler than I was. He was a perfect quarterback and a perfect Raider.” — John Madden
Easy Autograph? No but has 226 certifieds
Rookie Card: 1973 Topps #487

Randall Cunningham
Quarterback, Philadelphia Eagles, Minnesota Vikings, Dallas Cowboys, Baltimore Ravens, 1985-2001
One of the most-mobile quarterbacks in NFL history during his career, he helped usher in a new type of player at the position and still put up MVP-caliber numbers while leading his teams to the playoffs in eight of his 16 seasons.
Key Stats/Honors: Threw for 29,979 yards(43rd all-time) and 207 touchdowns (36th) and rushed for 4,928 yards ad 35 more touchdowns …. 1990 NFL MVP, three-time NFL Player of the Year .. four Pro Bowl appearances.
Super Bowl Rings? No
Buzz-worthy Quote: “My dad loved watching Cunningham, so when I decided to play football, all we did was watch his highlights. We’d watch how well he moved in the pocket to avoid defenders and make plays — not just with his legs, but with his arm. He was one of the first true game-changers the league saw.” — Robert Griffin III
Easy Autograph? Yes with 224 certifieds
Rookie Card: 1987 Topps #296

Terrell Owens
Wide Receiver, San Francisco 49ers, Philadelphia Eagles, Dallas Cowboys, Buffalo Bills, Cincinnati Bengals, 1996-2010
Love ’em or hate ’em, you can’t deny the production that Owens put up on the field with eight seasons of 10 or more touchdowns and nine seasons of 1,000-plus yards and career totals among the game’s all-time greats.
Key Stats/Honors: A member of the all-2000s team and a six-time Pro Bowl player whose 153 receiving touchdowns rank third in the history of the NFL and his 15,934 receiving yards rank second to only Jerry Rice. Tack on three more rushing TDs and he’s got just four players ahead of him on the all-time scoring list. Period.
Super Bowl Rings? No
Easy Autograph? No with 101 certifieds
Rookie Card: Has 10 but best is arguably 1996 SP #7

Shaun Alexander
Running Back, Seattle Seahawks & Washington, 2000-2008
You might think he’s too young/recent or didn’t play long enough, but there’s something to be said for production in a short amount of time. He’s also perhaps overlooked because of his playing on the West Coast — that’s happened many times in Seattle Seahawks history and he’s one of the team’s greats.
Key Stats/Honors: The 2005 NFL MVP ranks seventh on the career rushing touchdowns list with 100 — more than Hall of Famers Barry Sanders, Franco Harris, Jerome Bettis, Curtis Martin and Eric Dickerson. His 9,453 yards in eight seasons ranks 32nd on the career list. … Three-time Pro Bowl player ran for more than 1,100 yards in a season five times and posted 1,880 in his MVP season — a mark that still ranks as the 11th-best in history.
Super Bowl Rings? No
Easy Autograph? Yes with 290 certifieds
Rookie Card: Has 70 but best arguably is 2000 Playoff Contenders #113 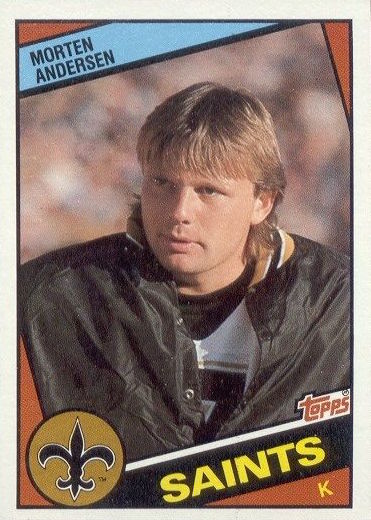