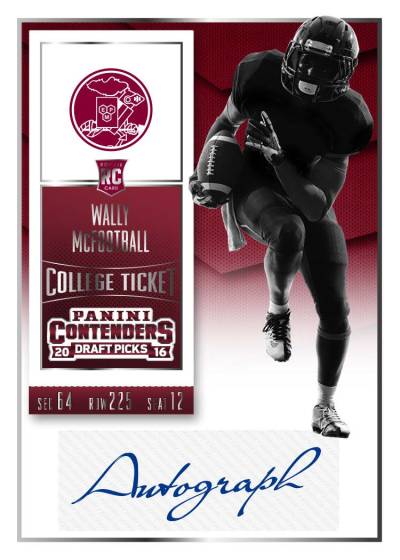 What’s buzz-worthy: This year’s top college stars who have declared for the 2016 NFL Draft will have some of their first cards here with the familiar pro look of Contenders while still showcasing their school colors. 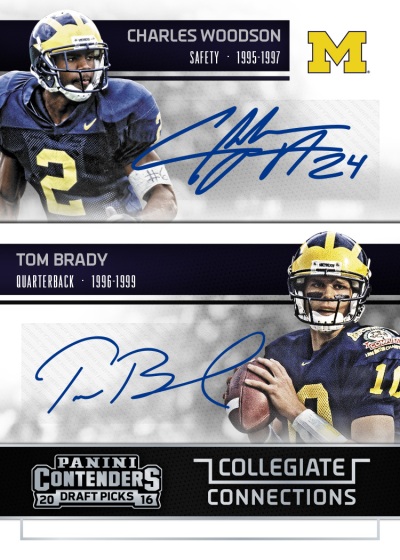 The Basics: Each hobby box will include 112 insert cards as well as a mix of cars from the base set, which will include past greats in their college colors alongside top college players who are now eligible to appear on cards. … Among the inserts in each box will be Rush Week, Class Reunion, Collegiate Connections and Passing Grades (four of each per box) along with 48 Game Day Tickets, 24 School Colors and 24 Old School Colors cards. … The standard set will include Cracked Ice parallels and variations as there have been in past years, while inserts will spotlight past and present stars as we have seen in the recent Contenders baseball release.

For autograph collectors, there will be a few options here, including Alumni Ink — a crop that will include the likes of Joe Namath, Emmitt Smith, Jerry Rice, Bo Jackson, Brett Favre, Dan Marino and even Tim Tebow to name a few. … The College Ticket autos will have a Bowl (/99), Cracked Ice (/23), Playoff (/14) College Championship (1/1) and printing plate versions. … Autographs will also be found for the other inserts in this one, including dual autos in the Collegiate Connections set, which will be limited to only five copies per card.

>> Click here to pre-order and see even more on the sell sheet (link to come).