With the blockbuster Batman vs. Superman: Dawn of Justice less than three months away, we’re just getting warmed up when it comes to the marketing and merchandising — and the latest reveal for the DC franchise is here with a full line of vinyl from Funko.

That means you can get Batfleck and Supes in a few ways — and none of them bleed. 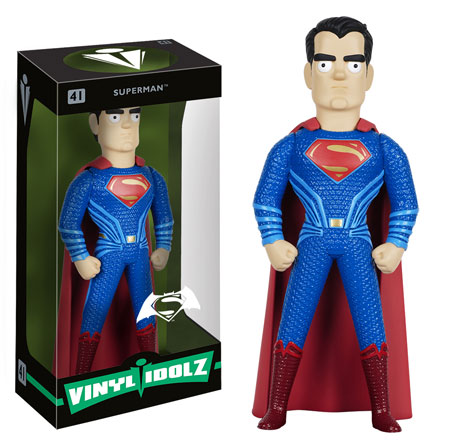 There are six Funko Pop! figures for the film, which are available now. These big-headed, big-eyed little ones are available for Batman, Superman, Wonder Woman, Aquaman, a Superman Soldier and Batman in his Knightmare gear. (Oddly, there’s no Lex Luthor in any of the lines despite an apparent prominent role in the film by Jesse Eisenberg.)

The four can also be found as Wacky Wobbler and Wacky Wobbler Minis — bobbleheads — as well as Dorbz — the smaller and simpler (i.e. rounder) vinyl option from the company. A Batmobile version of Batman will be found in the Dorbz Ridez line.

The main characters also will have Vinyl Idolz figures — taller, more cartoon vinyls — while a wide selection of characters will be found in packs of Mystery Minis.  (There will be 12 in that one.) Lastly, the main four also will have Pop! Heroes Pen Toppers — miniature Pop! figures that can attach to a pen or pencil.

Why? Just for fun — and you can see all of them in our gallery below.

Batman vs. Superman: Dawn of Justice is set to arrive on March 25.