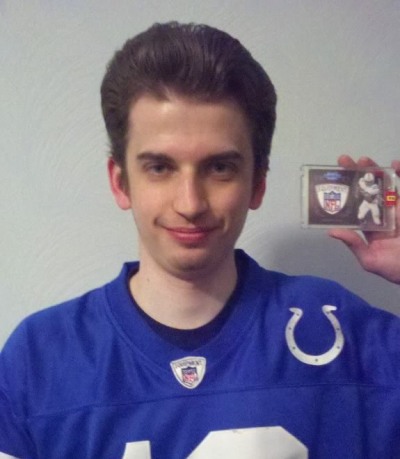 Location: Connecticut
Work away from cards: Client services for a furniture and textiles company
Collecting since: 1989

Current collecting projects: Always looking for anything rare/nice of Huddy.

One cool card: 2011 Triple Threads All Star Sleeve patch tri-fold booklet 1/1 of Tim Hudson, bought it from a fellow YouTube member after a mutual friend referred me.

One cool stat: I recently made a video series capturing my entire Huddy collection to date, it took 3 days to film and I broke it up into 19 parts.

A fellow collector says: “Tom is a great guy who is always on the lookout for cards other people may be interested for their collections. He constantly contacts me about things he sees at shows or on eBay that I may have missed for mine. As far as his own collecting habits, Tom is always looking for current Colts and Colt legends. He is also looking for Tim Hudson cards he does not have, which becomes harder and harder with each passing day.” — Micah Distel, @distemic

In his own words: I’ve collected for most of my life. My parents and I did shows in the early 1990s. I’ve worked for numerous card shops over the years. YouTube is a big part of my current collecting life — it’s my only social media. The hobby has opened up a vast network of new friends and I look forward to continuing those relationships, they are more important than the cardboard to me.

Do you have a collecting story worth seeing here? Follow Buzz on Twitter @BlowoutBuzz or send BlowoutBuzz a direct message on the Blowout forum.