He may not end up being a top-10 pick, but he’ll definitely be a target of collectors.

Alabama junior running back Derrick Henry is headed to the NFL with a formal announcement to come on Friday. This comes on the heels of a Heisman-winning campaign where he led the Crimson Tide to a national championship and set single-season and career rushing records for the program.

Henry is rated as the second-best running back by ESPN behind Ohio State’s Ezekiel Elliott in a draft that, based on some projections, may not be super-stocked with collector-friendly offensive players (QBs, RBs, WRs) among the first-rounders. 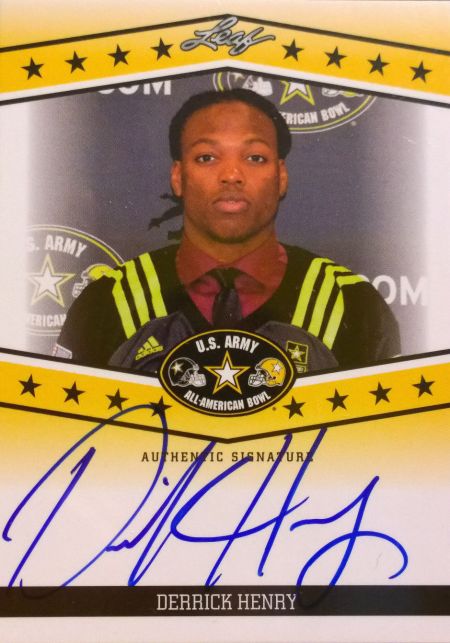 Henry’s 2,219 rushing yards and 28 touchdowns led the FBS this season — and his 3,591 career rushing yards, his total after the title game, added to his stable of SEC and Crimson Tide records that already included the season mark, a record 10 100-yard games in a season, a record 20 consecutive games with a touchdown, and pretty much everything else for Alabama RBs. He’s just the second Heisman-winner in the school’s history.

Oh, and most importantly for collectors, he’s also already got cardboard. (Elliott, too.)

Thanks to Leaf Trading Cards and its 2013 U.S. Army All-American Bowl releases, Henry already appears on 23 different certified autographs and seven memorabilia cards thanks to his part in the high school showcase game. Boxes of 2013 Leaf Army All-American include 12 autographed cards, so they aren’t cheap, nor are they plentiful. They typically sell for more than $100 if available. Henry also appears on cards in the 2013 Leaf Metal Draft release, which is also not the easiest box to find.

Henry’s career record came in just three seasons, topping the previous mark by Shaun Alexander, who played eight seasons for the Seattle Seahawks and was a league MVP.

Underclassmen have until Monday to declare for the draft.