Countless collectors call themselves prospectors, and that particular focus is one that can lead to a lot of pack-ripping or a lot of secondary market purchases with future flips in mind.

One brand that’s got many of those coveted newcomer names year after year is Elite Extra Edition, which is Panini America‘s foilboard-focused prospecting brand that typically packs one of the deepest checklists and, with Hot Boxes, some of the highest autograph totals in the hobby.

While the dust isn’t yet settling on the recently released newest edition of the brand, Buzz decided to take a look back at nine names who you should know from the previous two editions (2013 and 2014) and see how they did last season. Why? There are inevitably some bargains to be had if you consider this brand and these guys (along with countless other players that may not yet be on the radars of too many prospectors) given box prices these days. After all, old wax can still be good wax if the price is right. 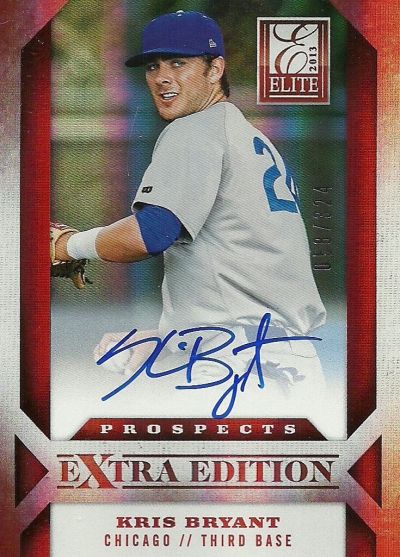 Kris Bryant — 3B, Chicago Cubs
2015: .275 Avg., 26 HR, 99 RBI, 13 SB
The National League Rookie of the Year owned the hobby in the time leading up to his delayed arrival in Wrigley Field and he fared pretty well after that, too, helping lead the Cubs into the postseason. (He also led the NL in strikeouts to prove he was still a rookie.)

Aaron Judge — OF/DH, New York Yankees
2015: .255 Avg., 20 HR, 72 RBI, 7 SB (between Double-A Trenton and Triple-A Scranton Wilkes-Barre)
The No. 3 prospect in the Yankees organization according to Baseball America, this walking mountain (6-7, 275) of a 23-year-old could be a big deal in The Big Apple if the average and power improve. And we all know how many deep-pocketed collectors love Yankees pinstripes. 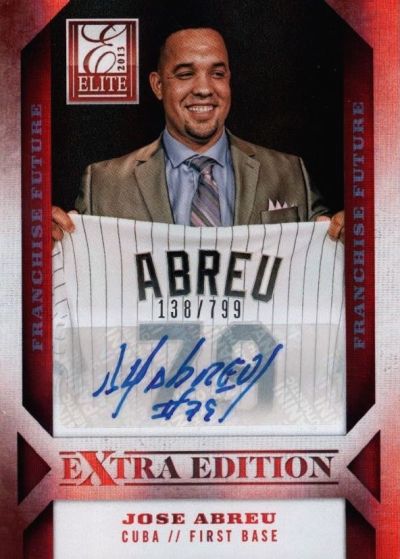 Jose Abreu — 1B, Chicago White Sox
2015: .290 Avg., 30 HR, 101 RBI
It seems that the 2014 American League Rookie of the Year pretty much vanished off collectors’ radars last year — and that’s pretty hard to do when while still hitting 30 homers. He’s a bit of a bargain right now with plenty of signing options out there. This one is very affordable and it was one of his first autos. 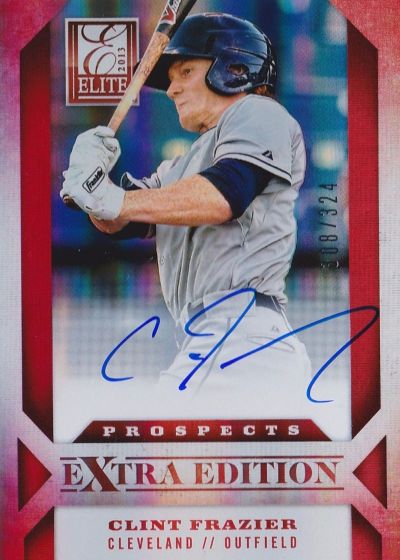 Clint Frazier — OF, Cleveland Indians
2015: .285 Avg., 16 HR, 72 RBI, 15 SB (at Single-A Lynchburg)
He’s the No. 2 prospect in the Indians organization, according to Baseball America, but he’s more off the radar (and more affordable) than he was after he was drafted as an 18-year-old, and the fifth-overall pick in 2013. He’s still got a long way to go, but his numbers seem to be improving and impressive compared to others who were in the same draft class.

Kyle Schwarber — OF-C, Chicago Cubs
2015: .246 Avg., 16 HR, 43 RBI, 3 SB
If you don’t know his name, then you were probably napping all of last season when he was a rookie. All you need to know is that he got even better in the postseason with five homers and eight RBI while hitting .333 in nine games — those are numbers that have to be paid attention to along with seemingly the entire Cubs roster when it comes to cards. What might Schwarber do with full season? We should find out soon.

Carlos Rodon — SP, Chicago White Sox
2015: 9-6, 3.75 ERA, 139 Ks, 71 BBs in 139-plus IP
The third-overall pick in the 2014 MLB Draft was a steady presence for the White Sox last year and finished strong, winning four of his last five starts. Pitchers don’t get the kind of attention that hitters often do, so some could consider this guy potentially undervalued. (Added trivia: The other two guys drafted ahead of him in 2014? They haven’t yet made it to the majors.)

A.J. Reed — 1B/DH, Houston Astros
2015: .340 Avg., 34 HR, 127 RBI (at Single-A Lancaster & Double-A Corpus Christi)
He’s the No. 1 prospect in the Astros organization, according to Baseball America, and the stats show some of the biggest reasons why. Despite all that power, this former Kentucky Wildcat didn’t fare as well in the Arizona Fall League, hitting .231 with one homer and six RBI in 11 games. We all know that Astros prospects are getting watched no matter what these days, though. 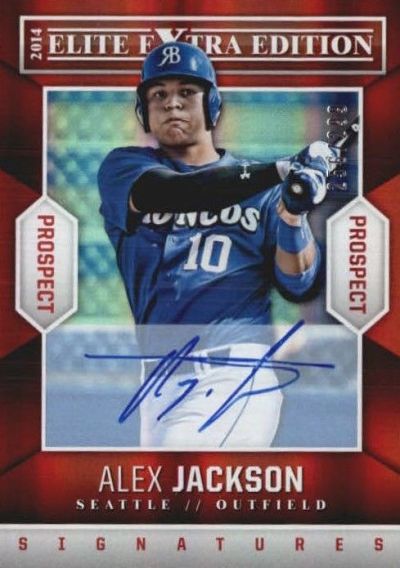 Alex Jackson — OF/DH, Seattle Mariners
2015: .208 Avg., 8 HR, 38 RBI, 3 SB (at Single-A Everett & Clinton)
He was ranked 20th-best in baseball entering last season by Baseball America but showed that he needs to work on some things when he hit just .157 for the Lumberkings. The good news? The sixth-overall pick is just 20 years old this season — and that’s always something noticed when it comes to top prospects. A rough season like last year also can mean some off-radar bargains as long as he delivers on expectations.

Michael Conforto  — OF, New York Mets
2015: .270 Avg., 9 HR, 26 RBI
This former Oregon State Beavers star got his first bite of The Big Apple last season with 47 hits in 56 games. While that nixes his chances at a 2016 Rookie of the Year run, he’s still sought-after on cardboard after a postseason showing that included three homers (two in the World Series) for the NL champions.