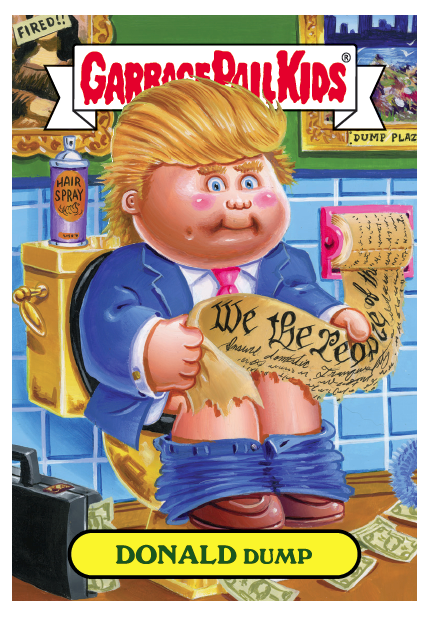 Five presidential candidates will take a few more jabs on Wednesday when Topps‘ newest group of Garbage Pail Kids officially arrives with a 10-card subset specifically focusing on those seeking the highest office in the land. 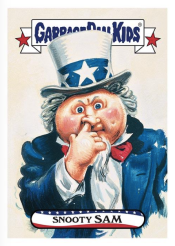 The 2016 Topps Garbage Kids: American As Apple Pie In Your Face set includes spoofs of Donald Trump, Hillary Clinton, Bernie Sanders, Jeb Bush and Ben Carson. Each of them has a pair of names adorning artwork meant to evoke a laugh or two at their expense as part of an overall product that parodies American pastimes, icons and moments as only the Garbage Pail Kids can.

Its artwork on the wrappers? You can see it at right — it’s all keeping with an All-American theme. (You can click here to view a PDF of the checklist.) 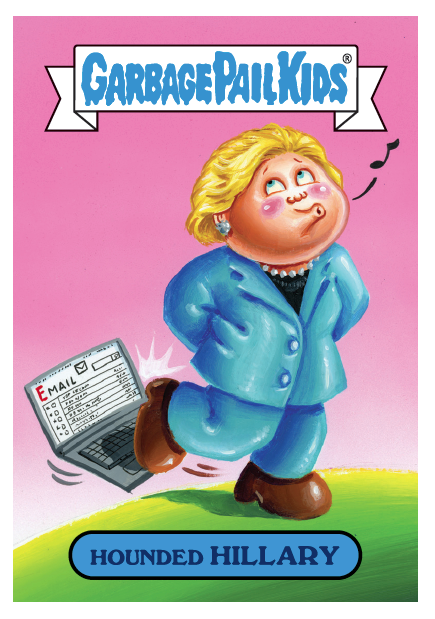 For Trump, he’s now known as Donald Dump and Tumultuous Trump during a rather Constitutional moment. For Clinton, she’s now known as Hounded Hillary and Cyber Clinton while stashing a laptop. For Sanders, he’s Savage Sanders and Berzerk Bernie (to go with some Rambo-style artwork), while for Carson it’s Brainy Ben and Clueless Carson for an open-skulled cartoon character holding a brain. The election controversies of the past come into play on Bush’s cards, which show Joyless Jeb and Ballot Bush dumping ballots into the mouths of some hungry Florida gators.

What are they selling for? Not much — yet — for the first few cards to appear in online auctions.