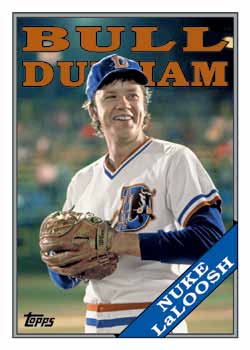 What’s buzz-worthy: All these years later, Ebby Calvin “Nuke” LaLoosh makes it to The Show — on Topps cardboard, that is — as the stars of Bull Durham, are among the surprises in Topps’ newest edition of the retro-themed brand. Previously teased were Kevin Costner‘s autographs but now we know it’s potentially more than just Crash Davis coming to packs.

The Basics: The Durham inserts lead the way here using the 1988 Topps design. The final lineup was not yet revealed but each of them will have autographs as well as Red (/TBD) and 1/1 Black and printing plate parallels. Tim Robbins, Durham creator Ron Shelton and Robert Wuhl were among those teased with Costner so far. … The standard set will consist of 300 cards with three different years used from past designs — 1953, 1979 and 1991. These will have Blue, Red and 1/1 Black parallels as well as plates. There also will be short-printed cards to be found, but no details were offered there. … The insert card lineup will include 1969 Topps Supers, 1985 Topps No. 1 Draft Picks and a 1985 Father-Son insert. These will have Red, Black and plate parallels, too.

There will be two Fan Favorites autos per box with on-card sigs the standard here. They will have Blue, Red and Black parallels. Meanwhile, Topps Originals buybacks with autos also will be worked into the mix. Each of the insert sets will have autographed versions to chase. … A preliminary checklist for signers or standard cards was not released.