Call this week the calm before the storm.

There are just three brands on the schedule for release this week — one football, one baseball, one gaming — in advance of 11 coming next week.

For football fans, Panini America presents 2015 Donruss Signature Series, which includes four autographs per box. The base set consists of 400 signed cards and every box includes an autographed rookie jersey — or a multi-auto booklet, which is found one per case. 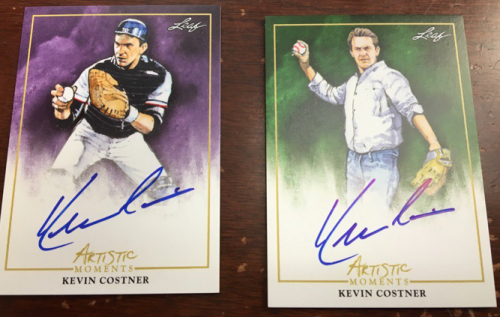 For baseball fans, 2015 Leaf Trinity arrives with the first Kevin Costner certified autos among the six autos per box that will showcase young talents in a few different card types. Also look for NHL rookie Jack Eichel throwing out a first pitch in Boston among the cards with inscriptions.

For the gamers, there will be Yu-gi-oh! Emperor of Darkness, which “is filled with some of the most imposing Monsters ever made, and they demand Tribute” with a mix of new and classic cards.

For more on these brands and the rest of this week’s new releases — including sellsheets and even more information — click on the links below. (Dates, as always, are subject to change.)