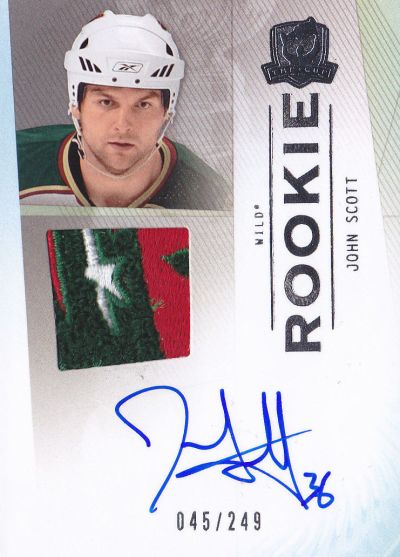 He scores two goals and wins the All-Star Game MVP, and that’s precisely what happened with John Scott on Sunday night.

The tale of a journeyman’s route to the NHL All-Star Game is one that had a lot of ups and downs and seemingly a lot of politics. (It’s a story that SBNation initially was all over here.) The basics? A fan vote led to a guy who’s played for six teams in eight seasons with 11 career points making the team. Then, when he was traded and demoted, he was thought to be no longer eligible for the game. Then the NHL said he could play.

And that’s what he did, clearly capturing the fans in Nashville as he received the loudest ovation pre-game and had a few chants for him during the action besides his goal-scoring moments. (Oh, and his helmet from the event is headed to the Hall of Fame.)

The 33-year-old’s Rookie Cards can be found in 2009-10 NHL products back when he was a member of the Minnesota Wild. He has a dozen RCs from brands made by Upper Deck — Artifacts, O-Pee-Chee, SP Authentic, SP Game-used, SPx, The Cup, Ultra, Upper Deck, Champ’s Ice, MVP and Victory. Action on some of those cards seems pretty warm and others seem to be moving well in the wake of the game.

Nearly all of his 100 or so cards come from his rookie year. How far off the radar is he now? He hasn’t even had any cards since 2013-14 when Panini America threw him in its Score set. Five cards that year — and nothing since. (His earliest cards are from a 2008-09 Be A Player release.)

This limited slate of cards, combined with his dubious Internet fame and unusual tale had seen rarer versions of his RCs and their parallels had been commanding a few bucks before his All-Star showing. Now? Well, there seems to be a lot more interest in anything Scott — though there’s not that much out there. His All-Star sweaters are among the hot sellers and were reportedly sold out at the event according to comments made during the game’s broadcast.

You can bet that Upper Deck will expedite Scott’s return to trading cards soon but the company had not released any statements regarding that just yet.