The Garbage Pail Kids mocking presidential candidates seems to have caught on this year, and Topps has one more offering for collectors who are getting in on the action.

Previous releases for the two Primary Series GPKs have been card-sized stickers, but four new releases revealed on Friday give fans a jumbo look at the in-pack stickers and a new design heading toward Presidents Day. 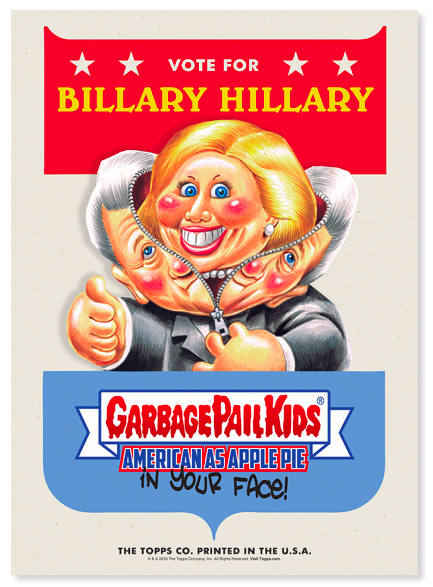 The standard politicians’ cards in wax packs are now blown up to 10-by-14 posters with a $19.99 price tag attached. That’s the same price and size for the new Campaign Poster Series that’s available as singles and sets, which are limited to 199 copies and are $14.99. Six politicians are mocked here — Donald Trump, Hillary Clinton, Marco Rubio, Bernie Sanders, Ted Cruz and Jeb Bush.

Gold versions of the posters are limited to only one copy at $99.99, while the gold set is limited to 49 copies at $29.99. These releases are only available initially on Topps.com.