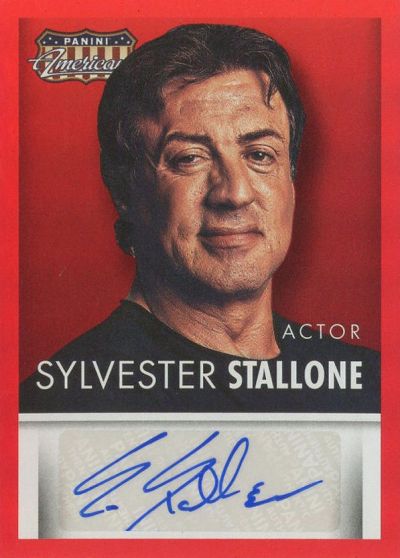 The Academy Awards are set for Sunday and the top films and actors will come home with Oscars, but you shouldn’t expect to be able to build a collection of the winners’ certified autograph cards.

Because barely any of this year’s top nominees have ever signed on for a certified (non-cut) autograph. And, in most instances, it’s been years since those few who have signed have sat down to do the honors.

Just five of the 20 nominees for Best Actor/Actress and the Best Supporting roles have certified autos right now — and one of those just recently arrived. The number also sounds high but consider that some signings among these five took place more than a decade ago.

Sylvester Stallone is the only “plentiful” signer of late — and he’s far from high-volume. He’s signed for Topps and Panini America in recent years and can be found in Americana and Allen & Ginter. He’s perhaps going to be the headline-grabbing winner on Sunday if he takes home a supporting Oscar for a role in Creed, the latest film from the Rocky franchise. (His original film cleaned up on big awards back in 1976 — a trailblazer for sports films — but he did not win an individual award.)

Meanwhile, the other nominees this year who have signed cards for companies in the past are:

— Charlotte Rampling, whose autographs just arrived in the newest Dexter set.
— Tom Hardy, who signed for the Star Trek Nemesis set way back in 2002.
— Cate Blanchett, who signed for a pair of Topps Lord of the Rings sets in 2001 and 2002.
— Jennifer Lawrence, who signed a small number of cards for NECA‘s The Hunger Games set in 2012.

The reality here? The biggest names among the nominees are probably too busy, not interested or too expensive to be included in products compared to the potential market for those products. (Pop culture sets would be more likely than standalone licensed card sets for many films.) There are plenty of household names found among the Best Picture casts — and there’s likely to be a signer or two nestled among the casts if you do some hunting — but the pursuit of some kind of collection via cardboard would be very tough here.

See the rest of the nominees here.