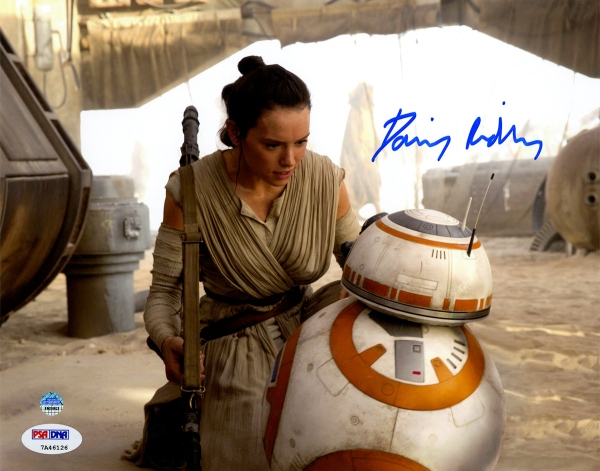 One of the more in-demand autographs in the galaxy is now available.

It’s the ink of Star Wars: The Force Awakens star Daisy Ridley and it can be found via Steiner Sports.

The New Rochelle, N.Y.-based autograph memorabilia company offered nine signed photos on Monday night with prices starting at $649.99 for an 8-by-10 image. 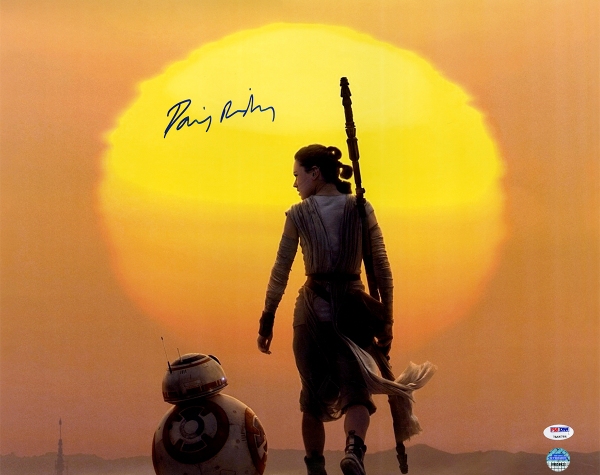 Each of the photos is PSA/DNA authenticated and also carries a tamper-proof Steiner hologram. There are seven different images with two of them available in a larger 16-by-20 format for $50 more ($699.99).

Update (March 3): Steiner also has added a pair of signed action figures — also something heavily collected — for $699.99 apiece. It also has dropped the price for the photos since the original listing. They now start at $449.99.

Ridley was the lead, Rey, in The Force Awakens and figures to be the face of the new franchise. Her first certified autographs are likely to come from Leaf Trading Cards as that company recently revealed that it had signed her to a lucrative autograph deal for its Pop Century line of celebrity cards. Topps‘ newest Star Wars cards for the new movie arrived with a Mystery Redemption autograph card that was originally noted as being for Ridley but then had her name redacted from its checklist. Demand for the card and speculation that it will be Ridley has seen it sell for more than $2,000 in online auctions.

Topps officials recently said it is still pursuing a deal with her. John Boyega, who plays Finn in the new films, signed on with the company for its newest releases.

Check out the images from Steiner in the gallery below. Click here for more info on the Steiner site.