It’s been three years since the last TNA Wrestling card set from TRISTAR, so the autographs from some of the wrestling promotion’s top stars may be starting to dry up a bit on cardboard.

The company has changed a lot in the last few years, too, which makes a new development on its  website, ShopTNA.com, a surprise. How? A few generations of old promotional photos can be found autographed for bargain prices — and many are signed by top names who have not been involved with TNA for some time. 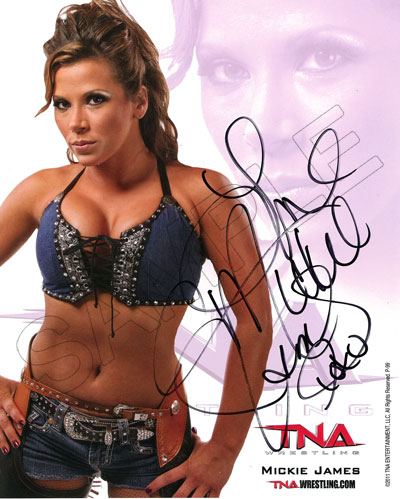 Past and present stars for the company are all available on autographed 8-by-10 promo photos (images with added info making them a little more like trading cards) and each of them are the exact same price — no matter who signed or how many people might have signed them. (Some tag teams are available.)

No matter who they are, they can be landed for just $9.99 on promo photos that are a little more official — and arguably more collectable and potentially valuable — than random 8-by-10 images.

Among those in WWE or NXT right now are are A.J. Styles, Samoa Joe, Xavier Woods, Booker T and The Dudleys (some with different personas than their TNA years). Others of note among the nearly 100 signed photos available include Rob Van Dam, Mickie James, Doc Gallows, Tara, Abyss, Brooke Adams, Christy Hemme, Chavo Guerrero Jr., Taz and even non-wrestlers TNA president Dixie Carter and Brooke Hogan.

Not all of their autographs are all that expensive, but this would allow a collector to pick up several photos from a source that should have very little questions about authenticity all in a single swoop. About half of the images available (the more-notable ones) can be seen below in our gallery. You can click here to see who else is available.