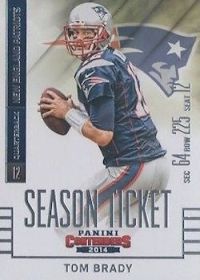 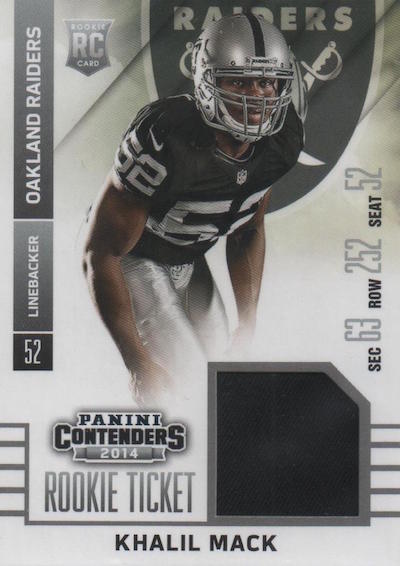 What’s Buzz-worthy: The original suggested retail price for this one was $49.99 as it was a box created for a premium experience at retail beyond a standard blaster box but also at a fraction of the hobby box (five autos) cost. … This box didn’t have any of the marquee names seen on its lid, but Khalil Mack is a solid player on defense in the NFL and he was one of the memorabilia cards only found in retail. … The design of the base set in this one is strong, though the backs do oddly lack statistics. With those, this could arguably be a perfectly balanced and effective package. With stats this would have been a set you’d want two or three times larger. … The insert lineup is modest here, but there’s enough to break up the packs. This design was the one used for the over-loaded insert version in the college release so maybe Buzz is spoiled by that one coughing up more inserts than basic cards. … The rookie autographs cap the 100-card base set with a few versions of many players’ autographed cards so the box is actually a rarity these days in that it’s light on regular (unsigned) Rookie Cards. The same variation approach happens with the memorabilia cards. … If you land one of those big names, these boxes can be very fun, though even big names may not break the bank. If you want to dabble with some football and expect some hits — but don’t want to spend too much — then this is a good option.

Product Grade: A-
Box Grade: B
Fun Grade: B+