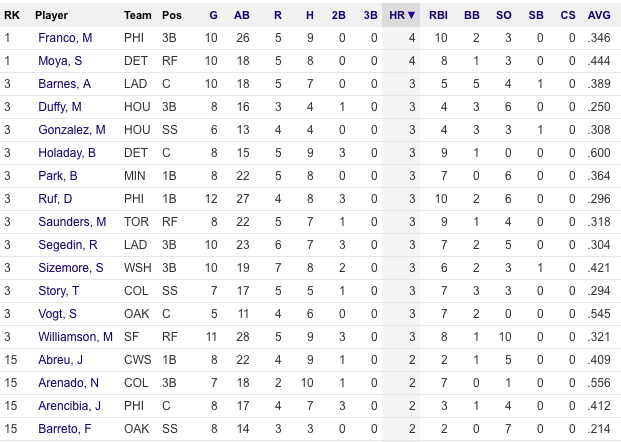 There are two ways to look at spring training stats — they can offer glimpses of reality to come or they can provide false hope.

We’re a good ways into this year’s slate of spring games and the MLB stat sheet so far shows some hobby-friendly names among the leaders in home runs.

As of today, Maikel Franco and Steven Moya are tops in homers with four apiece — both good signs as they are young players with star potential who have plenty of cardboard for collectors to chase.

Other established guys like Colorado’s Nolan Arenado (.556 average; 10-for-18) have impressive starts as well. Philadelphia’s Darin Ruf might get some attention as well, though he’s not exactly popular compared to back when he arrived. (Is he a potential bargain to stash? We’ll see.)
Sort the stat sheet a different way, and you’ll see Atlanta’s Hector Olivera with 13 hits and a .433 average, while Detroit’s Ian Kinsler has 12 RBI in eight games.

Over on the pitching side, there’s Cleveland’s Danny Salazar has 14 strikeouts in nine innings, while Colorado’s Jason Gurka has 10 Ks in four innings of work. Overall, there are 13 pitchers who have two wins so far this season, while six have two or more saves. It will take some time for stars to emerge from the unknowns, though.

Gurka, for example, made his big-league debut last year and struggled but doesn’t even have any MLB cardboard — just minor league team issues. If an unknown can “arrive,” there will be interest in cardboard, of course. (Gurka probably isn’t that guy — but his stats stand out … at least as of today.)

Spring numbers can lie, of course, and a glimpse at the standings shows that. The heavily favored Cubs at 3-9 — dead last in the Cactus League.

Who are you watching or who has impressed you this spring? Let Buzz know here in a comment or via Twitter.