He’s already joined the Topps Authentics team as one of the top players on the radar of the company’s memorabilia division, but a hot start this spring just might have him on the radar of more collectors soon.

He’s Hector Olivera, and he’s hit .438 (14-for-32) with just a single strikeout in 11 games this spring for the Atlanta Braves, where he’s likely to be in left field on Opening Day.

“We’ve seen him juice some balls, but we don’t know if this guy is going to be a nine-home-run guy or a 15-18 home run guy. We might not know that until later this year,” said Braves manager Fredi Gonzalez to The Atlanta Journal-Constitution. “He doesn’t take things for granted. There’s nobody that works harder than him. He’s here early, he works, and as coaches, that’s what you want to see and what he gives us.” 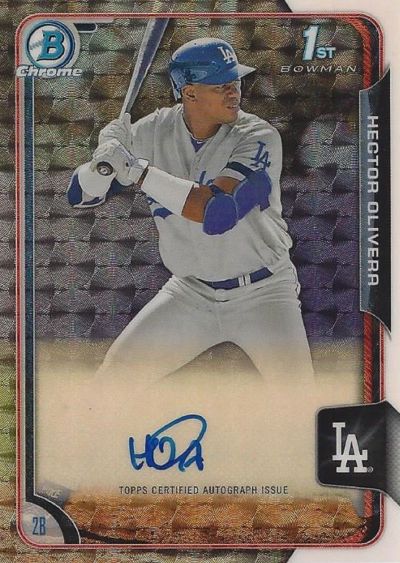 Olivera’s rookie status is still intact for this season after the 30-year-old from Cuba hit .253 with two homers and 11 RBI in 24 games last season with the Braves. He came to Atlanta from the Dodgers as part of the three-team deal that included 10 players last July. In 11 international campaigns, he hit .323 with 96 homers and 435 RBI.

His first MLB cards feature him in a Dodgers uniform and those can be found in 2015 Bowman Chrome. (Want his Superfractor auto? It can be had right here.) His first Braves autographs arrived in 2016 Topps Series 1, the company’s Spring Fever promotion and in the recently released Topps Heritage. He presently has fewer than 20 total autograph cards and he presently has fewer than 100 cards of any kind for collectors to chase. He has not appeared on autograph cards with any other company previously and has only appeared in Panini America‘s 2016 Donruss beyond Topps brands. Olivera’s earliest cards can be found in 2009 Bowman Chrome as he was a member of Cuba’s World Baseball Classic squad.

For upcoming autographed options, Topps has Olivera slated to appear in several future products, including Museum Collection, Bowman, Bowman Inception and Strata to name a few.

With the Braves being in rebuilding mode, Olivera has the potential to be a hobby highlight at the big-league level as the team awaits the arrival of No. 1 overall draft pick Dansby Swanson in the future and a new stadium next season.