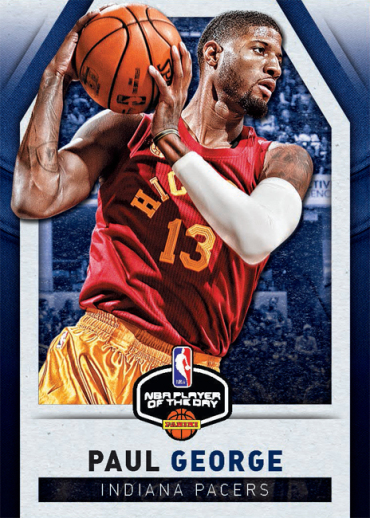 It’s nod to the past and the big screen, but one card in the forthcoming Panini NBA Player of the Day set might stand out to some collectors as different.

It’s a Paul George card in the Indiana Pacers’ “Hickory Pacers” uniforms worn a few times this season. Why? It’s the 30th anniversary of the movie Hoosiers, an Indiana basketball staple, and that’s one of the ways the Pacers are honoring the rich history of the game in the state on “Hickory Nights.” It’s a promotion that has resulted in big demand for Hickory items from the team.

Have the Hickory uniforms hit cardboard previously this season? Buzz hasn’t seen every card but it’s possible that this is the first. (Tweet Buzz or leave a comment if you have seen others.)

Now, on to the Player of the Day details …

The hobby shop program will tip off along with the NBA Playoffs and the grand prize is a shot to spend the day with an NBA player. Roughly 400 stores will be part of the promotion with eligible NBA purchases. If a collector pulls the player of the day, they are eligible for a prize.

Shops will receive posters, bags, shirts, promo packs and prizes that include an autographed and slabbed card as the key prize (one of 18 different cards) in the month-long promotion. Each shop will receive more than 100 promo packs with the 25 cards seen below potentially inside. They will have Cracked Ice parallels and memorabilia cards also will be in the mix. Shop winners will be made eligible for the Player of the Day grand prize.

Among the autographed cards will be Kristaps Porzingis, Justise Winslow, Devin Booker, Marcus Smart, Harrison Barnes and Giannis Antetokounmpo to name a few. The nine-card memorabilia set will include the likes of Karl-Anthony Towns, Porzingis and D’Angelo Russell.

“The Player of the Day promotion helps hobby shops sell more trading cards while rewarding collectors who purchase Panini products,” said Jason Howarth, Panini America’s Vice President of Marketing. “We are thrilled to offer this promotion to hobby shops in support of our NBA trading cards and also make one collector’s dream come true by rewarding an opportunity to spend a day with an NBA player.”

Shops can register for the promotion at www.PaniniPOD.com, while collectors can follow the action on Twitter @PaniniPOD.

One thought on “Panini America brings Player of the Day promo to NBA & makes some Hickory Pacers cardboard, too”