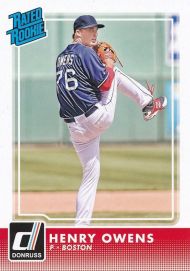 The box: 2016 Donruss baseball cards (blaster box)
Where to buy: BlowoutCards.com (for hobby)

What’s Buzz-worthy: Each and every blaster box of 2016 Donruss includes one autograph or memorabilia card for $19.99, which is a plus when you consider that the brand’s landmark The Famous (San Diego) Chicken memorabilia card can be found in retail packs. That’s a pricey card. … There aren’t a lot of cards in this one — 42 in the box compared to the 88 with a hit in the 2015-16 Donruss NBA release — but the feel of the rip when you get to the stack of cards is actually pretty comfortable. You don’t get a ton of base cards, but you do get a good amount of inserts to mix things up and keep the packs varied. … One unusual (for today) feature in this set? Actual checklist cards. … Overall, this is a brief and fun rip — one that feels like it’s crisper and cleaner than last year’s release, which was quite fun and delivered pretty good value in terms of inserts and hits in a hobby box. This year’s hobby boxes deliver three hits and seem to deliver pretty well for the price, but if you’re on the fence you might try a blaster before digging in on some hobby wax.