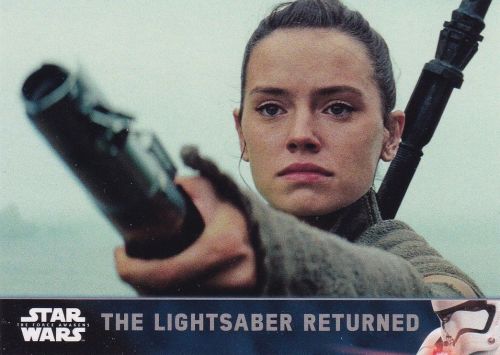 When the second series of Topps‘ Star Wars: The Force Awakens cards officially arrive tomorrow, there will be two base cards that will add a simple twist to the collecting of everything from a long time ago in a galaxy far, far away.

Star Wars: The Force Awakens Series 2 will include a pair of short-printed base cards.

Card Nos. 101 and 102 will be substantially tougher to find than the rest of the cards in the new set as they reveal one of the surprise moments in the film that brought in more than $932.3 million at the box office in the United States alone.

No. 102 (The Lightsaber Returned) has sold for as much as $85 on eBay since the cards began trickling onto the auction site from retail breaks of the product. Spoiler Alert: Both cards show Rey (Daisy Ridley) from the final sequence of the film where she returns a Lightsaber to Luke Skywalke (Mark Hamill), who had been in exile during The Force Awakens.

The checklists were released by Topps during the weekend with each of the SPs clearly noted. If you missed them elsewhere on The Buzz, you can see them below.