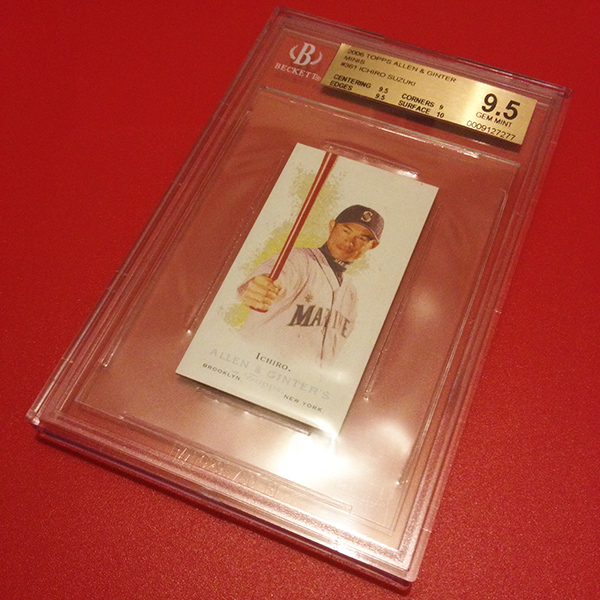 Here’s the third Grading Diary here on The Buzz …

The Card: 2006 Topps Allen & Ginter Minis #361 Ichiro Suzuki (Rip Card mini)
The Reason Graded: Buzz went in hard on Allen & Ginter in its early years, shredding many boxes and finding several Rip Cards. They all met their demise and inside one of them was this extended mini of a future Hall of Famer and likely 3,000 Hit Club member. It’s always needed a slab, but the timing is right this season if Buzz were a seller. (Buzz is not.)
The Grade: BGS 9.5

Reality Check: This is the highest-graded specimen out there along with two others, while a BGS 10 does not exist. While Ginter is heavily ripped, this number seems quite low for a landmark release and a key player. Why? Buzz suspects many never saw the light of day, remaining inside Rip Cards at this very moment. Rip Cards also can lead to damage during production or opening, which is also a reason why there may not be that many graded. 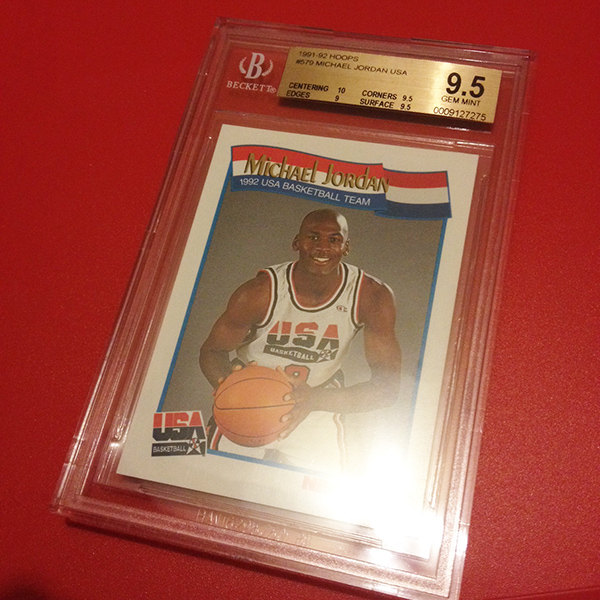 The Card: 1991-92 NBA Hoops #579 Michael Jordan USA
The Reason Graded: The Dream Team is a big highlight in an otherwise mundane wasteland that is 1991-92 Hoops and Skybox. While Skybox has a better design, a box break of Hoops yields several copies of each Dream Team members card. These were a big deal then and they’re still memorable while being not all that valuable. When Buzz ripped a box, there were several to choose from and this one stood out as flawless.
The Grade: BGS 9.5

Reality Check: The pop report says it all. Only six cards graded higher than this one, despite more than 400 making their way into slabs. That turns this $1 card into about a $35 card, though for us kids from that time it’s priceless just like a 1989-90 Hoops Jordan BGS 10 would be. The polybag wrappers of this Hoops release protected cards moreso than that first year but both are tough to find in high grade. 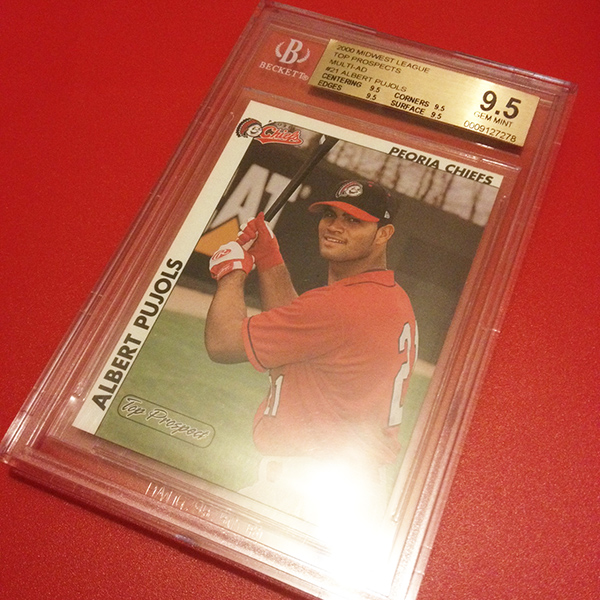 The Card: 2000 Midwest League Top Prospects Multi-Ad #21 Albert Pujols
The Reason Graded: This is an obscure card and it predates all of his 2001 Rookie Cards but because it’s Pujols it’s not that rare compared to the typical minor-league releases not found in packs. Buzz picked this up as a raw single on COMC.com a few years ago and had it tucked away in the “to be graded” box until now because there’s no way Bowman Chrome is coming my way.
The Grade: BGS 9.5

Reality Check: The pop report shows how this is far from your typical minor league card with massive volume but only 1.4 percent of the cards graded receiving a perfect 10. Not many have topped this one so Buzz was happy with the purchase. 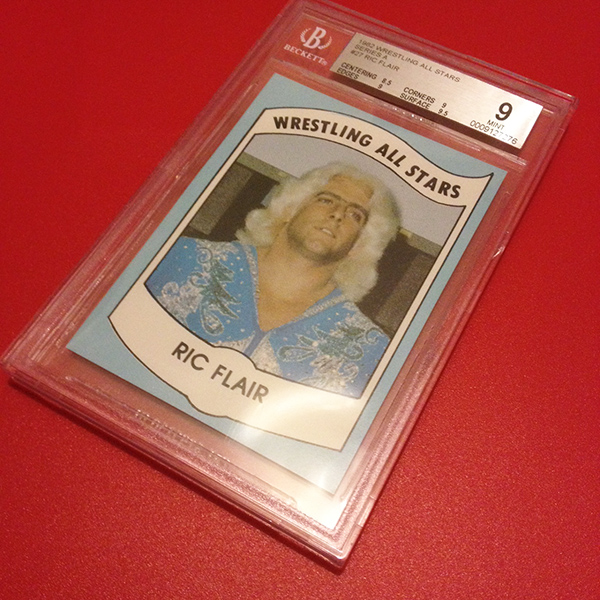 The Card: 1982 Wrestling All-Stars Series A #27 Ric Flair
The Reason Graded: One of the iconic performers of the last 40 years, “The Nature Boy” Ric Flair is a 16-time world champ from back in the days when it mattered as a traveling champion for the National Wrestling Alliance, helping bring legitimacy and star power to the regional promotions around the world. And this is his Rookie Card. (He won’t be competing at WrestleMania 32 on Sunday, but he’s sure to get involved in his daughter Charlotte’s championship match.)
The Grade: BGS 9

Reality Check: This is the first semi-traditional wrestling card release of the modern collectibles era just as Vince McMahon transformed the World Wrestling Federation into the cable television behemoth it is today. (The first official WWF set arrived in packs three years later.) This set, which was sold via mail order and not in packs, is full of the biggest names and few are bigger than this one. The grade is strong, though Buzz figured the centering would hurt. Typically these cards show some damage because they are slightly larger than standard cards (not fitting in some types of top-loaders) and their colorful borders can often have printing spots and show damage easily. Key graded singles from this one have exploded in value in the last 15 years with heavy competition among PSA registry buyers — and pop reports there are higher (89 total cards graded) but by no means plentiful. 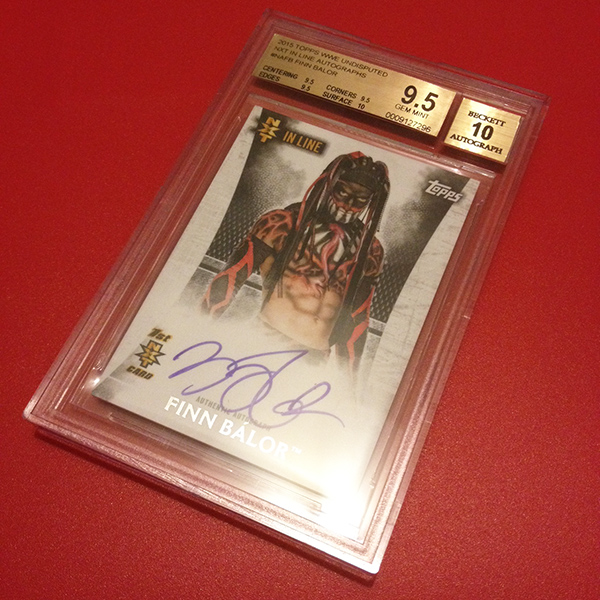 The Card: 2015 Topps WWE Undisputed NXT In Line Autos #NAFB Finn Balor
The Reason Graded: When Undisputed arrived, it ushered in a new era for WWE cards as the first hit-per-pack high-end release. The NXT autos — newcomers in the company’s NXT ranks — were found one per box and this one was in Buzz’s. The international performer with one of the most-unique looks in WWE history has yet to make his main roster debut, but something big seems likely for WrestleMania 32 this weekend in Dallas.
The Grade: BGS 9.5 with 10 auto

Reality Check: It’s a tad surprising to see this many copies of the card graded, but then again he is one of the key first-time autos in a landmark product. My card is one of the worst-graded specimens but that’s just fine in this case.