Here’s the fourth Grading Diary here on The Buzz …

The Card: 2013 Fleer Retro Fleer Greats of the Game Autos #JN21 Joe Namath
The Reason Graded: The college colors of this Greats of the Game card just seemed very rich with that Crimson backed by the metallic gold. It’s a rarer auto in the product and the design is a memorable one from the early 2000s, which were pluses when Buzz saw the card’s condition and its bargain price when it was bought raw.
The Grade: BGS 9 (with 10 auto)

Reality Check: Namath autos are plentiful, but he’s an iconic player whose ink will be in demand once he slows on signing. Once Buzz added this card to the stash, it simply needed a slab. It’s the only copy graded, showing that the card might not be as popular as those showing him as a New York Jet, but that’s a plus in Buzz’s book as it’s one of his best-looking college cards out there. 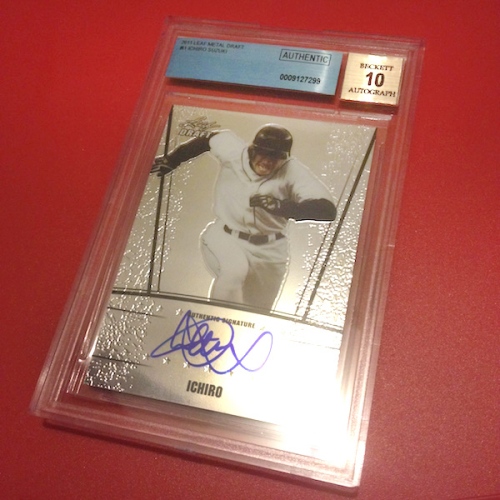 The Card: 2011 Leaf Metal Draft #I1 Ichiro Suzuki
The Reason Graded: Buzz pulled this one in a group break for far less than the price of a Leaf Metal Draft box — and also far less than an Ichiro auto should cost. It needed slabbed no matter what and in this case it did not make a minimum grade of 8.5 due to back issues. Nonetheless, it’s the ink that matters most here.
The Grade: BGS Authentic (with 10 auto)

Reality Check: The BGS Authentic grade doesn’t show on the pop report, but it was interesting to see so few copies of the card graded. 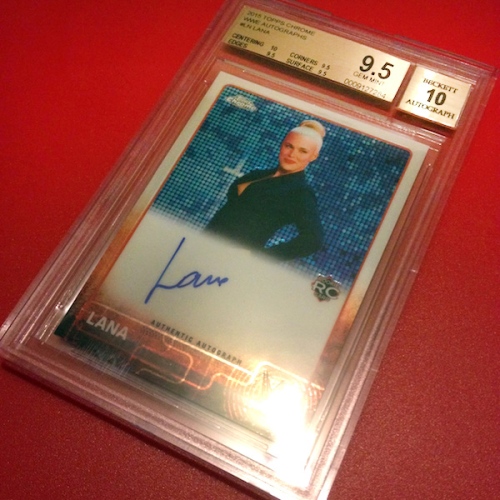 The Card: 2015 Topps Chrome WWE Autographs Lana
The Reason Graded: A year ago, this WWE Diva’s story lines were at the forefront of Raw and the character (think the wife of Ivan Drago in Rocky IV) was cheeky and entertaining all at the same time. Buzz picked this one up raw on COMC.com way back then and it sat on the back-burner of the to-be-graded stack for too long.
The Grade: BGS 9.5 (with 10 auto)

Reality Check: This is the only copy graded, which is good, but her stock was probably stronger in the past. Added trivia here? She was one of the early Florida State Cowgirls back in the day with Jenn Sterger.

The Card: 2015 Topps WWE Heritage Autographs Finn Balor
The Reason Graded: The striking persona of the NXT champion is one that’s one part comic book and one part Undertaker in terms of its uniqueness on the WWE landscape. (There are few, if any, like him visually.) Buzz had his Undisputed auto in the last grading diary so we follow up with this one here.
The Grade: BGS 9 (with 10 auto)

Reality Check: This card has been topped by a perfect Pristine 10 but is still an impressive card. The ink in Heritage is a highlight as long as the 1985 Topps baseball design jives with your  collecting taste. 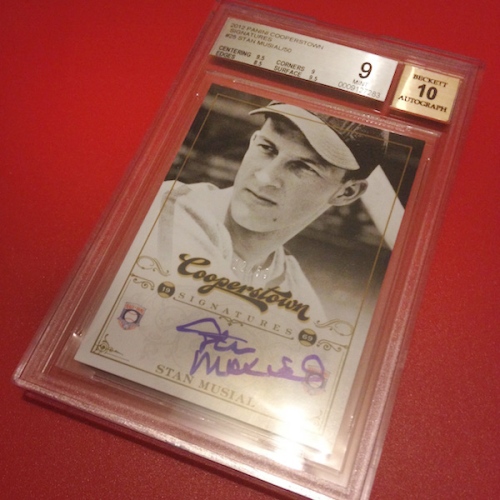 The Card: 2012 Panini Cooperstown Signatures Stan Musial (/50)
The Reason Graded: One of the rarest autographs in the landmark first Hall of Fame product from Panini America, this card was destined for a slab the second Buzz pulled it from a pack. That second became a split-second once Buzz saw that these cards had sold for $300 a pop on eBay, unlike many of the plentiful Musial (often sticker) autographs found on the market these days.
The Grade: BGS 9 (with 10 auto)

Reality Check: This is a set that’s worthy of completion and grading. Buzz has a few of the rarities already in slabs, so this was a win.