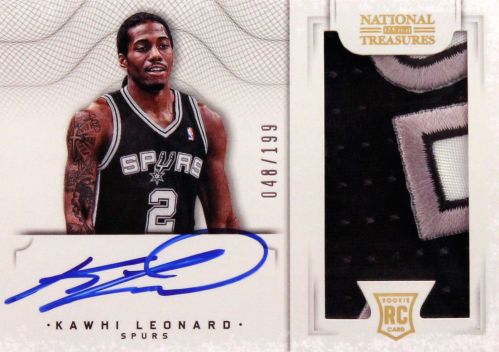 San Antonio Spurs forward Kawhi Leonard just finished his fifth season in the NBA and he’s already added to a strong resume that should spark interest in his perhaps still-overlooked cards.

He was named the NBA’s Defensive Player of the Year for the second season in a row on Monday and that puts him in some elite territory as only the eighth player in league history to win the award in back-to-back seasons and just the ninth multi-time winner.

Dikembe Mutombo and Ben Wallace are the most-honored players for the award with four in their trophy cases, while Dwight Howard is the only player to win it three times.

Leonard scored 21.2 points with 6.8 rebounds, 1.0 blocks and 1.8 steals per game for the Spurs this season, helping the team to a 67-15 record — second-best in the NBA behind the record-setting Golden State Warriors.

The 24-year-old was the 15th overall pick in the 2011 NBA Draft a selection of the Indiana Pacers out of San Diego State. He was traded to the Spurs that same night along with two players for George Hill. Leonard picked up his first All-Star nod this season to go with his NBA Finals MVP award and championship ring from 2013-14.

Leonard’s Rookie Cards can be found in 2012-13 Panini America products — he has 26 RCs — while overall he appears on more than 1,100 cards. He has just over 250 different certified autographs and nearly 350 memorabilia cards for collectors to chase.