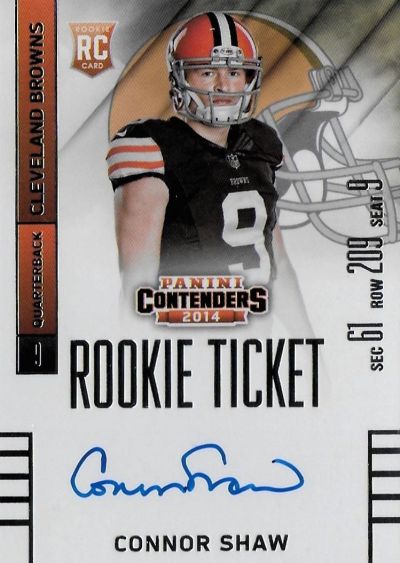 If you’re a long-time reader of The Buzz, you may remember the Steiner Sports promotion that allowed anybody, anywhere to trade in a legit Cleveland Browns quarterback autograph from the past for a $100 gift card.

Buzz’s headline back in January played up the Johnny Manziel drama — sadly, it’s derailed completely since then — and but opted to take a shot here with a cheaper auto. Buzz picked off a Connor Shaw 2014 Panini Contenders autograph from COMC.com for just $1.99, had it delivered, followed the instructions from Steiner and mailed it in.

Buzz waited but never received a gift card — as it turns out, Steiner had so many requests as part of the promotion that it ran out of physical gift cards to mail. (Those still waiting should email the company with their info and address they used when they mailed in their Browns item.) After getting the discount info, Buzz waited again to find a key item to use the code. Today was the day as Buzz spent a few minutes to check out the site after a promotional email, wondering if a worthy item could be found and searching the game-used section, entertainment section and even the clearance rack for the right item.

And then Buzz found it.

Among the items in the clearance section — a mess of impressive items with big  names from varying times in the past — Mark McGwire, Alex Rodriguez, Stan Musial, Manny Ramirez and many others — was an impressive piece in both its visuals and its value.

It’s a 16-by-20 photo of Hank Aaron and the memorable moment where he held the home run ball over his head after his 715th career home run on April 8, 1974. It’s very similar to the photo that appeared on the cover of Sports Illustrated the following week. This image was taken by photographer Ken Regan, who worked for Time, Sports Illustrated, Life and Newsweek — and it’s a much more impressive image than those of the actual home run swing that was captured by countless other photographers who were there that evening. (Some of those are available via Steiner — at a higher price.)

This Steiner-certified item is signed by both Regan and Aaron and carried a sale price of $200.99 down from its regular price of $629.99. Knock $100 off of that sale price, add a reasonable shipping cost, and that’s how Buzz added an impressive piece that will stay in the ol’ personal collection for a long, long time.

Now Buzz will just have to figure out a frame after it arrives.