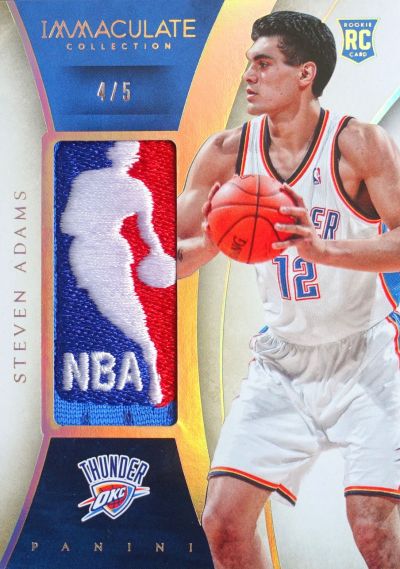 We all know why Oklahoma City’s Steven Adams was in the headlines after Game 3 of the Western Conference Finals (and, if not, it’s on heavy rotation on ESPN just tune in), but the New Zealand-born center just might be a guy on the team whose cardboard could be on the move if the Thunder can dethrone the defending champion Golden State Warriors.

He’s not Kevin Durant or Russell Westbrook. The third-year star and former 12th-overall draft pick has a good amount of cardboard available so, just for kicks, let’s take a look at some of his cards …

You may not recognize him on his cards from his rookie season, but he’s got a decent array of low-end and high-end for collectors to chase and some of them seem like bargains if they can be found. And, again, he’s (for the most part) not a pricey player to collect like the Thunder’s two big established stars.

Since his cardboard debut in 2013-14, he’s appeared in slightly more than 600 different cards from Panini America and roughly a quarter of those are certified autographs. Interestingly, he’s also got nearly 200 different memorabilia cards, too, but just 27 of all his cards would get the traditional Rookie Card designation.

Only five of those RCs are autographs — cards from Timeless Treasures, Immaculate Collection, Gold Standard and Spectra. His toughest RCs are autos limited to only 15 copies that are found in Panini Signatures. (He has 10 different cards in that release’s standard set, all RCs.)

His rarer and high-end autograph and memorabilia cards from his rookie season can command some good asking prices — but they’re certainly not on the level as elite rookies price-wise. The same can be said for those that have sold.

Generally, he’s an affordable player — even for autographs — and he’s locked into a contract that runs through next year. If he continues to improve (and generally his numbers have) and play well in the postseason and make a continued run toward a ring, he’ll definitely get noticed by the collectors who can’t land some of his pricier teammates.

Or, at worst, he’ll be a fun and affordable international player to collect.