He’s been a legendary hitter in MLB since arriving in a Seattle Mariners uniform back in 2001, and he’s now 42 years old and on a tear with 10 hits in his last three games for the Miami Marlins.

He’s Ichiro Suzuki and he’s just 40 hits away from the 3,000 Hit Club as a major-leaguer. (Throw on 1,434 hits in Japan and, well, that’s a career mark even Pete Rose should appreciate.)

Even if you’re a deep-pocketed collector, chasing Ichiro cardboard isn’t easy. He’s been in high demand since his legendary Rookie of the Year/MVP season and there’s plenty of cardboard from that year alone. There’s also been plenty since. And there are also plenty of collectors from around the world who are watching his cardboard just as intently as they are watching the box scores right now. 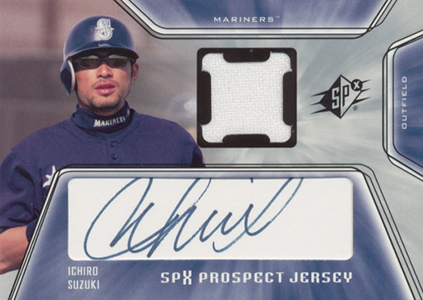 Overall, he has nearly 10,500 different baseball cards but fewer than 450 of those are autographs. That should tell you something about the item to chase first. (It’s also a stat that makes these seem like a bargain.) He’s pushing 1,800 different memorabilia cards, though those are probably not as sought-after as his ink and his Rookie Cards.

And it’s the RCs where the challenge comes in. What do you collect? Between Upper Deck, Topps, Fleer and Donruss, he has 49 different RCs from 2001 — and countless other insert cards from that year to complicate matters. His 2001 SPx (above) is legendary as one of only two autographed RCs, while just 250 copies of his other RC auto, 2001 Ultimate Collection, exist.

Most collectors can’t swing one of those — even if they could find one — so a staple like 2001 Topps is perhaps a favorite, but there are plenty of options (and many of them are affordable) from that year.

Meanwhile, though, his Japanese RCs are much simpler, traditional cardboard and they can be had for pricey but not impossible prices. He has three RCs from that year — 1993 BBM (top), 1993 Takara and 1993 Tomy. The BBM is probably the easiest to land (heck, Buzz even owns one as a BGS 9) and the most-traditional-looking of the bunch. Your best bet is to buy one graded because fakes could exist given his high-profile status and our general unfamiliarity with those brands here in the States.

Suzuki’s presence will be felt in the upcoming 2016 Topps Series 2, which arrives on June 15 with a Chasing 3,000 insert set complete with autographs. The way he’s been hitting, though, he might have the mark in hand well before that date.