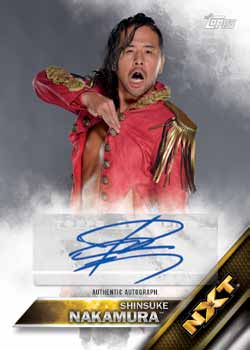 What’s buzz-worthy: For the first time, Topps’ WWE flagship wrestling card set gets a second series, which explains why many big names were not included in the 2016 Topps WWE release. This also will make it the largest standard Topps WWE set ever made with 100 more base cards. 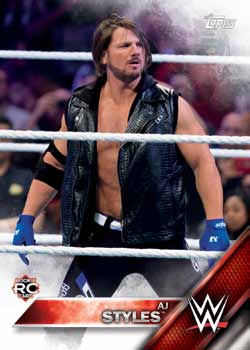 The Basics: The model remains the same here with Bronze, Silver (one per box), Gold (/10) and 1/1 Red parallels and printing plates for all 100 base cards, which will include stars from Raw, Smackdown and a selection of WWE Legends. … There will be a new crop of 20 NXT prospects, including Shinsuke Nakamura, who will have his first autographs here. … New for this release will be Total Divas, WWE Breaking Ground and Stone Cold Podcast insert cards that highlight the WWE’s newer non-traditional programming. These will be found between six and 12 times per hobby box. The fourth part of the ongoing Rock Tribute set will be found here to cap the inserts. … For autographs, there will be standard, Bronze (/50), hobby-only Silver (/25), Gold (/10) and 1/1 Red parallels as well as printing plates, while Triple Auto cards will be 1/1s. … The Relics will include Kiss Cards with Gold (/10) and 1/1 Red parallels along with autographed versions with the same parallel types. … Shirt Relics and Royal Rumble Relics will be in play here while mask and face-paint medallion cards will spotlight memorable looks with four parallel types. … Promo cards for the release will be found in three upcoming WWE DVD releases — Night of Champions, Hell in a Cell and Survivor Series.