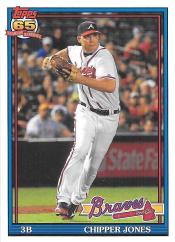 Where to buy: BlowoutCards.com

What’s Buzz-worthy: Archives in hobby form is a tad more exciting than the blaster box is, but ultimately you’re always at the mercy of the Cardboard Gods. This box didn’t actually seem as good (or as fun) as that over-delivering blaster was, but it did include two autos, one being a parallel, of two notable players from the past. … This box also included a short-print, which is not the norm in every box, while it delivered on the names among the inserts. As said before, this one is a good mix of the past and present and that helps it be more fun than you might think. The only guys who feel out of place here are the rookies — one might argue that they could be punted, but we know how much RCs can help entice some people into buying. … There’s a lot of potential here if you get lucky, and the Bull Durham autos are a real fun addition that can be collected more easily vs. their baseball-entertainment predecessors, Major League and Will Ferrell. … Buying by the case is probably your best bet at trying to land one of the bigger/rarer autos. Why? There will be safety in numbers because there probably will be a lot of inexpensive Fan Favorites autos inside boxes. Overall, though, this product is made to be a fun rip.

Product Grade: A
Box Grade: B+
Fun Grade: A