It sounded like a fun, cheap rip of some oldschool wax — a late-night buy just because it was a good deal — but it turned into another lesson about old cardboard.

This time, the product was a long-forgotten (and maybe unknown to some) release from Pro Set back in 1991 — the company’s UK edition of SuperStars MusiCards.

To those of you who were around for Pro Set, you probably fondly remember the football card chases created by the Dallas, Texas-based company in 1989 and 1990 and the overproduction that was happening but we never saw because everybody (and their mother) was buying. By 1991, many of its products — and there were many in the non-football realm — arrived with a thud. Not because they were bad but because they were trying new things and new things didn’t always work. (And because the presses kept on rolling.) By 1993, the company was back down to football and by 1994 the company was gone completely.

And if you weren’t around then? Well, you missed out on some of the best simple cardboard of all times … and one example of that is this 1991 SuperStars MusiCards UK Editon.

Here in the United States, the MusicCards actually arrived in two series and there were two series of Yo! MTV Raps cards as well to cover a whole other spectrum of genres on their own. The American version of the MusicCards set includes 340 cards with the two series mixed in the second wave boxes. The UK set is much simpler and doesn’t have as many duplicate appearances of performers on the checklist. (In the U.S. version, for example, there are five different Janet Jackson cards. In this set, there’s just one.)

The biggest difference here, though? Size and inclusions. There are some truly big names found in the UK release who weren’t found in the American set, despite it only being 150 cards. Among them are the only MusiCards of Whitney Houston and Prince (two cards each), The Rolling Stones, Michael Jackson, David Bowie, Elvis Presley, Elton John, Queen, The Beatles and Bruce Springsteen. The difference is likely due to publicity rights being different in the UK — otherwise you’d think they would be n0-brainers to appear in the U.S. release. There are, of course, a few UK bands that are definitely obscured by time that are included, too.

Boxes of these cards aren’t as plentiful as the American version, which might be the definition of junk wax despite some rich photography and impressive simplicity. Of course, there could be confusion between the releases since many of the cards have nearly identical card fronts though backs and numbering are different. (Fronts also can have minor differences like which corner the black box appears on.)

On a whim, I picked off a handful of boxes since they were cheap — cheaper than their original price but perhaps too cheap for the UK version, which actually had sold for as much as (a ridiculous) $50 a box recently, probably in the wake of Prince’s death.

So what made for the old-wax lesson this time around? Well, some simple math and the enigma of two cards. It’s a 150-card set. There are 10 cards per pack. There are 36 packs in a box. Sounds simple, right? Collation of the past isn’t so simple — and that’s the lesson here. A 150-card set couldn’t be completed from a 150-card box. 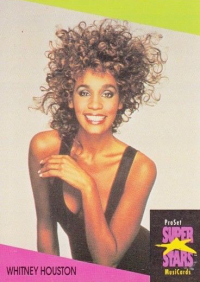 While I had between five and seven copies of every card that mattered — the stars — the trivial notion of trying to build a set became a frustrating challenge. These boxes weren’t intended to be opened — at least all at once — but it took four boxes to find the last two completely forgettable cards — No. 105 of Pet Shop Boys and No. 117 of Roxette.

Remember them? I now hate their bad music even more.

After this debacle, I’ve found myself oddly wanting to build a full master set of both U.S. releases — including the errors and promo cards that Pro Set was known for. Why? It just seems interesting at the moment and it shouldn’t be that expensive.

Maybe I’ll just buy those as a set instead of ripping into old wax. (Or not.)