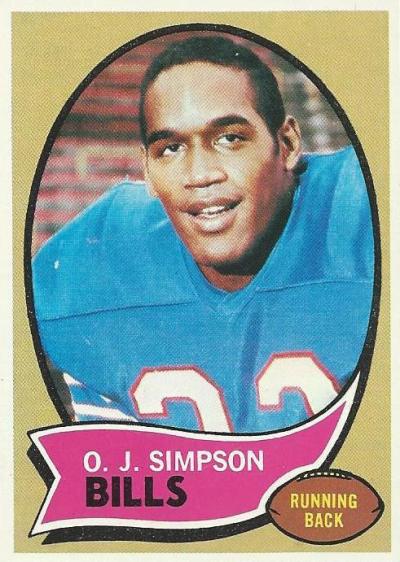 There’s no doubt that even after years out of the spotlight that O.J. Simpson remains one of the more-controversial and polarizing people on the planet, and we’ll get a new wave of discussion about the retired and incarcerated football star with the premiere of O.J.: Made in America, which is a five-part ESPN Films documentary, tonight on ABC. 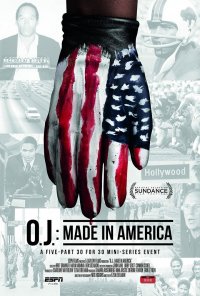 Simpson, of course, is behind bars for armed robbery and kidnapping after an altercation with a memorabilia dealer back in 2007. His acquittal in the deaths of his ex-wife Nicole Brown Simpson and Ronald Goldman — and the 1997 civil suit found Simpson liable for their deaths — will be one of the main focuses of the nearly eight-hour series.

Will the new story spark any added interest in his key cards? It’s very possible and people are seemingly already interested to some degree. His 1970 Topps Rookie Card (above) actually surged in value back during the first trial and there were non-NFL-licensed card companies that actually had him sign autographs while in jail. According to one advance account of the new documentary, those autographs signed in jail are discussed in the series.

“O.J. had only been in jail for two or three days when, per his agent Mike Gilbert, he gave instructions to start ‘marketing and merchandising and generating a lot of money,'” reads one advance review. “Gilbert and memorabilia dealer Bruce Fromong brought in fabric numbers for O.J. to sign, which would later be sewn into jerseys, and leather panels that would eventually become footballs. Demand, says Fromong, was through the roof, and as photographs reveal, an O.J. autograph signed from behind bars could go for hundreds of dollars.

“‘He sat in jail,’ says Fromong, ‘and we did $3-million dollars in autographs.’ One photograph of O.J. and Johnnie Cochran got both their signatures. ‘I look back,’ says Gilbert, ‘and think, this sucked. I can’t believe we did this.’” 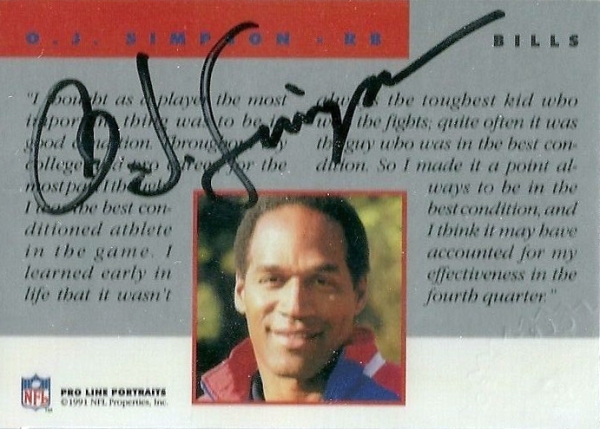 Will there be as much demand now? Probably not, but there is an added twist in today’s hobby landscape that’s dramatically different back then. Simpson has an odd place in the hobby because he’s simply (and appropriately) not been seen on NFL cardboard despite all those formidable years for the industry since the trial. Simpson does not appear on a single game-used memorabilia card and he appears on just 15 certified autographs — nearly all signed before his acquittal. His most-plentiful certified autograph cards are from the landmark 1991 Pro Line Portraits release, two Ted Williams Card Company cards and a pair of Signature Rookies cards. Everything else is of the non-packed oddball (Goal Line Art) or cut autograph variety.

Clearly Simpson is not available to NFL card licensees as he barely appears on more than 100 different football cards total — and three-fourths of those are from his playing days and the years before the trial. Again, that’s appropriate and makes sense in that the league probably doesn’t want people revisiting the mess that is his story while opening up packs of its cards.

However, it’s inevitable that some curiosity about his football cards will arise with this series adding to the ongoing dialogue. He’s already been talked about as the People vs. O.J. Simpson: American Crime Story series on FX where Cuba Gooding Jr. plays Simpson as part of an all-star cast. It has received critical acclaim for its reenactment of the trial and it carries love-to-hate-it status among many.

Unlike many football legends of his day, there’s simply not as much cardboard to go around for Simpson and you can see some of that interest in eBay action on his autographs. A PSA-DNA authenticated and slabbed copy of a Signature Rookies card signed and dated while in jail has sold for as much as $375 recently, while many other autos have sold for between $20 and $100. Meanwhile, high-grade copies of his Rookie Card routinely sell for big bucks with a recent high of $1,913.88 for a PSA 9 copy.

The entire Simpson case is a complicated one, and, no matter what you think happened, the story of his stardom and his fall will be sure to get people talking as we revisit one of the biggest stories in the country from not that long ago.

One thought on “Will “O.J.: Made in America” spark new interest in O.J. Simpson cards?”