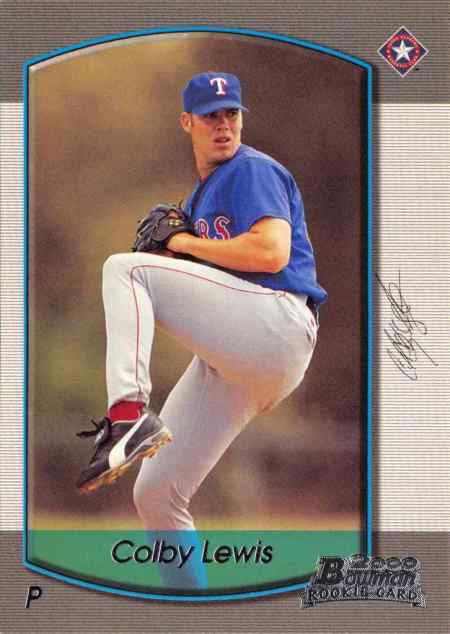 Colby Lewis flirted with throwing a no-hitter and the 24th perfect game in MLB history on Thursday in Oakland, but settled for a complete-game two-hit victory as his Texas Rangers beat the Athletics 5-1.

He struck out four in the game. The last gem was Kenny Rogers‘ perfect game back in 1994.

For collectors, and particularly Texas Rangers fans, an uptick in his play could be an interesting development as the 36-year-old right-hander has got very little cardboard.

His lone Rookie Cards can be found in the 2000 Bowman Draft and Bowman Chrome Draft box sets, which aren’t too expensive. Where it gets interesting is in the years that follow those. He appears on fewer than 300 different cards total despite 11 seasons in The Show with the Rangers, Tigers and Athletics.

Lewis appears on slightly more than 30 certified autograph cards and has just two game-used memorabilia cards. His first ink can be found in the 2000 Bowman Draft Autographs set — that would likely be his best autograph to most collectors — and, other than a single auto in 2001 Topps, he didn’t have another Topps auto until he appeared in 2013 Topps Supreme, which is loaded with parallels (more than 25 in his case). His only other autos are from Royal Rookies and Just Minors releases.

Lewis’ only memorabilia cards are also reportedly found in 2013 Topps Supreme — a total of just six copies made for a pair of dual-auto Relic cards with Ryan Vogelsong.