The Cleveland Cavaliers are your NBA Champions — and on Monday Panini America will have the cardboard to prove it.

The first real-time Panini Instant basketball cards will document the NBA Finals and the Cavs’ unlikely and historic championship beginning on Monday.

The company teased the images above shortly after Game 7 on Sunday night, confirming the previously teased cardboard and giving us all a hint of what’s to come. 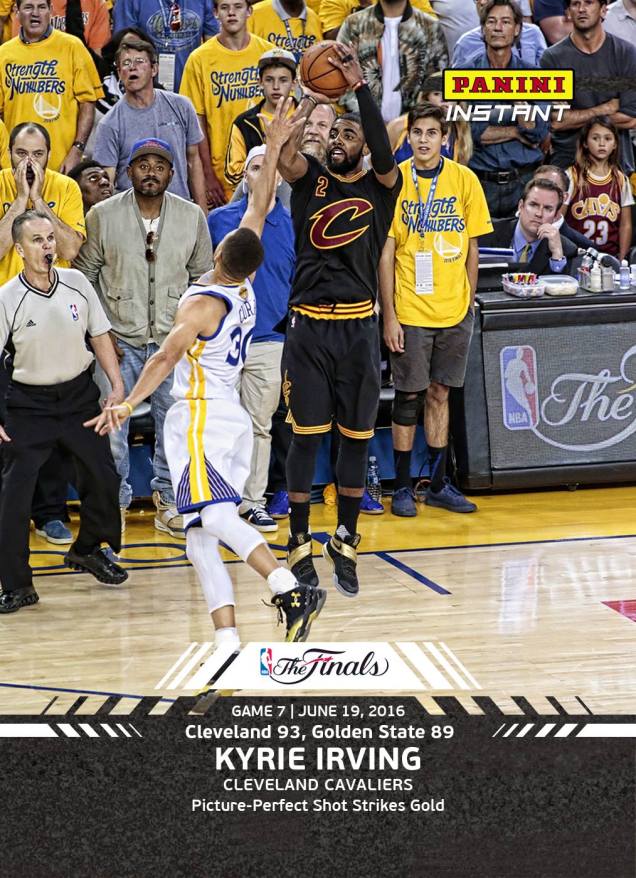 How many cards will be made for the NBA Finals? One for each game seems likely — but there could be more. Could there be an added focus or bonus cards for Panini exclusive Kyrie Irving? Perhaps, considering it’s the launch of the real-time cardboard platform and it’s an area that’s clearly becoming a competitive one between card companies. In short, Panini wants to make an impact with Instant.

Previous cards have been available in four types — a standard Red version that has unlimited print run potential (is made to order and numbered to that quantity), a Green version limited to 25, a Blue version limited to five  copies and a 1/1 Black copy as well. Cards start at $9.99 and are $249.99 for the 1/1 cards.

Update: The lineup of the first 11 cards can be seen in the gallery below and can be found here. Game 7 cards are still to come and all cards will be available for just 48 hours. There will be 15 cards in all. Among those cards will be  LeBron James’ Finals MVP performance, a Cavaliers team celebration card and one for Irving’s game-winning 3-pointer.

“Captivating moments like we saw last night during Game 7 and throughout this NBA Finals are what the Panini Instant platform is all about, it’s why Panini Instant was developed,” said Panini America CEO Mark Warsop. “The ability to capture the most exciting moments in sports on real-time trading cards is an exciting evolution for fans and collectors everywhere.”

The Instant program had begun with soccer cards for the Euro 2016 and Copa America events and both of those are ongoing. Some sellers have found a decent amount of success pre-selling the cards on eBay.